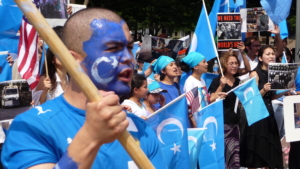 The idea of a Chinese monoculture is integral to the Communist Party’s control over its citizenry. As a result of the Chinese centralized government, religious persecution in China has arisen as a consequence of the country’s ethnic composition.

Chinese nationals are predominantly Han Chinese (more than 90 percent), while the remaining population is divided into 56 minority ethnic groups—each having distinct cultures and belief systems. As a communist nation spanning an enormous territory, China has strategically excluded these minority groups from its vision of the Chinese nation-state.

Since assuming power, President Xi Jinping has exerted intensifying pressure over China’s religious and spiritual communities. This affront on global religions—including Buddhism, Christianity and Islam— continues to take place in China. The surveillance and detainment of clergy members and religious dignitaries have accompanied the closure and destruction of churches and monasteries.

In Western China’s Xinjiang province, the Communist Party has begun to corral and ‘re-educate’ the Muslim Uighur demographic under the guise of national security. This targeted campaign against the Uighurs has been the subject of worldwide criticism and stands as a blunt example of China’s disregard for basic human rights.

The Uighur Muslim minority experiences the highest degree of religious persecution in China, primarily because of their proximity to the Middle East and supposed threat to the Chinese Communist Party. Xi Jinping has attempted to curb the potential for domestic terrorism and insurgency in the majorly Muslim province of Xinjiang through a series of legal measures to police, deny and indoctrinate.

In response to an escalation in anti-government violence in 2014, the Communist Party launched a large-scale indoctrination campaign against the Uighurs. Following an attack that year, the Communist Party expanded its surveillance and grip on the region. Such efforts culminated in the building of a ‘re-education’ facility located in a remote part of the Taklamakan Desert.

Today, the world recognizes this facility as an internment program; the re-education camp quickly became the site of the most alarming religious persecution in China. Under these oppressive living conditions, Uighurs must renounce Islam and submit to party dogmas. To date, estimates determine that these facilities have detained at least 1 million Uighur Muslims.

Beginning in 2016, the Chinese government imposed a Passport Recall Policy on the Xinjiang Uighur Autonomous Region. With the pretense of terrorism prevention, the policy restricts Xinjiang residents from being able to freely travel, especially to zones that it deems high-risk (i.e. the Middle East). When applying for passports, Xinjiang residents are subject to rigorous and invasive bureaucratic procedures not required of citizens hailing from other provinces. These include arbitrary application and passport renewal fees, as well as the processing of biometric data (DNA, blood samples and 3D imaging, etc.).

The idea of indoctrination through labor is reminiscent of inhuman labor practices from the Cultural Revolution, which had the intention of bolstering party loyalty. Comparatively, Uighurs and other Muslim detainees released from the Xinjiang camps must work in Chinese factories. Accepting lowly factory jobs is often a condition of release from the camps. In many cases, preexisting restrictions on mobility leave factory jobs—such as textiles and agribusiness—as the only employment options available for those released. As early as April 2018, the local government hatched the factory labor program, aimed at utilizing citizen labor to bring lucrative industries to the region.

While Uighur religious persecution in China has gained international attention the issue persists; there are various ways to aid protection of human rights for the Uighur population.

One way to advocate for the human rights of the Uighur population is to support the Uyghur Human Rights Project (UHRP), a nonprofit subsidiary of the Uyghur American Association (UAA). UHRP works to advocate for democracy and human rights in the Xinjiang Uyghur Autonomous Region of the People Republic of China. The sensitive geopolitics of the region can cause the relief efforts of international human rights organizations to become ineffective. UHRP helps to bolster relief efforts by supporting victims in telling their stories, increasing global media coverage of the religious persecution in China and exerting pressure on the perpetrators of this crisis.

Additionally, with increased awareness in the United States, the U.S. House recently passed an Uyghur Human Rights Policy Act. If enacted, this legislation would direct resources to China that will address human rights infringements and abuses. Supporting endeavors such as these will aid to end arbitrary religious persecution in China.