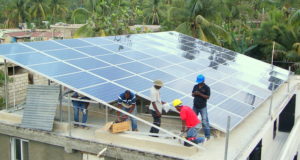 Energy poverty refers to people who lack access to modern energy services. They aren’t able to use an array of technologies, primarily electricity. Gaining energy access is a gateway to additional resources, and having it can lift families and communities out of poverty as a whole. Access to energy is one of the United Nations’ Sustainable Development Goals, which seeks to eradicate energy poverty by 2030. Off-grid solar technology is regarded as one of the promising ways to achieve this.

Currently, there are 840 million people who lack access to electricity and 573 million of those people reside in Sub-Saharan Africa. While 153 million people a year have been gaining electricity, remote areas have proven to be especially hard to reach. In areas such as Sub-Saharan Africa that are far from cities, off-grid solar technology is being used to generate electricity where it was previously unobtainable. Additionally, off-grid solar technology is now also being used to power water pumps, irrigation systems and refrigeration, making off-grid technology more promising than ever to solve energy poverty.

One company that has made extraordinary strides in increasing energy access is Bboxx. Bboxx’s mission is to aid developing countries through their decentralized solar-powered systems. To do so, they design, create, distribute and manage this off-grid solar technology. So far, Bboxx has positively impacted over one million people. It has allowed 350,000 solar home systems to be installed.

The technologies Bboxx creates are safer and cheaper than the kerosene-powered systems traditionally used in homes without electricity. Bboxx estimates the switch to using their clean, solar energy saves customers $200 a year. Additionally, it allows customers to pay for only what they actually consume, which is a cost-effective system that is monetarily achievable for its targeted customers.

To make their company as accessible and effective as possible, they created a system called Bboxx Pulse. This platform makes it easy for a utility company to monitor and serve all Bboxx customers. This even applies to the customers who live in rural areas that were previously hard to communicate with. To implement this and all of their other technology, Bboxx has formed partnerships with some of the countries’ governments it operates in. Doing this ensures that its technology is stable and supported.

Another organization dedicated to providing energy to communities in need is the Solar Electric Light Fund (SELF). It uses solar projects to increase healthcare, education, water and food security and economic development in under-resourced areas globally.

One of SELF’s programs is installing solar-pump water stations to areas that contain heavily contaminated water. It is currently working to install 24 of these stations in the Kalalé District of Benin in West Africa. This will provide clean water to 82,000 people. This is a life-changing development for this community, as 19% of deaths in this area are due to contaminated water. Access to clean water will drastically improve overall health in the area. It will also increase the safety of girls and women who usually had to travel long distances to obtain water for their families.

Additionally, SELF has extensively worked on installing solar-powered technologies in Haiti to improve public health and energy access. However, these systems are unsustainable unless they can be maintained by trained workers. To solve this issue, SELF formed Haiti’s National Solar Training Center (NSTC). This program trains students to become solar technicians, which in turn provides well-paying jobs to Haitians while making their solar infrastructures sustainable. Overall, organizations such as Bboxx and SELF are increasing the safety and health of thousands of communities around the world by providing them with off-grid solar technology.