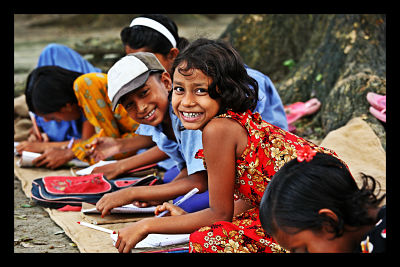 By ranking school performance in various countries, it becomes clearer which nation’s educational needs are not being met. In a report titled, “Universal Basic Skills: What countries stand to gain,” written by economists Eric Hanushek and Ludger Woessmann, 76 countries were ranked by test scores. Asian countries ranked the highest and the United States trailed behind in 28th place.

Many developing countries were closer to the bottom of the list, with Ghana receiving the lowest score of all 76 countries. As Andreas Schleicher, the Education Director of the Organization for Economic Cooperation and Development, or OECD,  points out, “the quality of schooling in a country is a powerful predictor of the wealth countries will produce in the long run.”

Hanushek and Woessmann believe that studying the discrepancies between nations can also lead to finding solutions to these discrepancies.

“This report offers a glimpse of the stunning economic and social benefits that all countries, regardless of their national wealth, stand to gain if they ensure that every child not only has access to education but, through that education, acquires at least the baseline level of skills needed to participate fully in society,” explain Hanushek and Woessmann. They also contend that if poorer countries try to emulate the educational practices of the more successful countries, they could meet the goal of “universal basic skills” within the next decade.

Hanushek and Woessmann also believe that if a country acquires these universal basic skills, poverty levels will decrease and the country will be able to better provide quality health care and technologies.

To the economists dedicated to studying this issue, it is not simply a contest to see which nation is smarter. An adequate education affects most, if not all, areas of a person’s livelihood. By prioritizing education, other problems stemming from poverty will consequently diminish, and people with higher education levels will have more resources and opportunities. If these findings gain traction, school systems around the world will benefit as they enact changes to prioritize the nation’s education needs.

The Program for International Student Assessment (PISA) is an exam given to 15-year-olds as a way to determine the strengths and weaknesses of education systems. PISA is administered every three years, and it focuses on reading, mathematics and science. It is examined on a national level, allowing countries to evaluate their education systems and make changes based on their students’ performance.

PISA was created by the Organization for Economic Co-operation and Development (OECD). The initial goal of the survey was to allow countries to learn from the educational policies of other countries that scored well. OECD claims that because the exam is not curriculum-based, it should allow for a true testing of how students can apply their knowledge to real-life situations.

Academics worldwide, however, believe that PISA is hurting the education systems around the world by making countries compete for the top rankings and decreasing the value of education in the long run.

In an open letter to Andreas Schleicher, the President of PISA, academics and school activists from around the globe express their concerns with the test and its consequences on education. The letter has received over 115 signatures.

The letter addresses many concerns about PISA and its long-term effects on education systems. The signatories believe that the rankings provided from the results of the exam cause countries to take drastic action to improve their ranking in three years. This may provide short-term results for a school system, but an entire education system cannot be improved in three years. It can take decades for educational policies to prove their effectiveness. PISA is causing schools to take short cuts to get higher in the rankings instead of creating real policies that can improve the education their students are receiving.

The academics opposed to the test also believe that PISA is causing schools to focus on preparing their students for the workforce, and therefore teaching a very narrowed curriculum. A strong point in their argument states that the goal of education should be “to prepare students for participation in democratic self-government, moral action and a life of personal development, growth and well-being.”

PISA is also being accused of diminishing the importance of the arts, increasing the idea of “teaching to the test” and taking away the freedom of teachers to teach how they choose.

The competition spurred by the exam means that PISA is not doing what the OECD intended for it to do. Instead of learning from other education systems, nations are attempting to drastically change their policies to get ahead in the educational race. As the PISA committee prepares for the 2015 exam, academics hope that a reevaluation of the consequences of the exam will bring a change to the assessment.

The Organization for Economic Cooperation and Development (OECD) reported the unemployment rate for September remained at 7.9 percent, unchanged from previous monthly levels.

The OECD’s unemployment report stood at 47.9 million people, 0.1 million less than the August number, but still 13.2 million more than July 2008.

In developed nations, however, the OECD said that unemployment has grown “exponentially in recent years.” In July 2008, unemployment stood at 34.7 million people – an increase of 38 percent over the last five years.

Unemployment rates fell in the United States and in Canada for the second and third consecutive months. The U.S. and Canada have unemployment percentages at 7.2 and 6.9, respectively.

Other countries saw the same decline that the U.S. and Canada saw: Japan, Australia and Korea, with unemployment rates at 4 percent, 5.6 percent, and 3 percent, in that order.

While unemployment is falling in some countries, others are not seeing the same decline. The OECD said the unemployment rate rose in Mexico (to 5 percent) and Greece, which saw an increase from 26.1 percent to 27.6 percent between 2012 and July.

In general, unemployment among women declined from 7.9 percent to 7.8 percent, while it has remained constant at 8 percent for men. The U.S., Slovenia, Iceland, Germany and Belgium followed similar trends.

Youth unemployment rates (those aged 15-24 years) significantly increased in France (to 26.1 percent), but remained stable in Spain (at 56.5 percent) and Portugal (at 36.9 percent), and decreased in Ireland (down 0.4 percentage points to 28 percent.)

According to the annual report from the Organization for Economic Co-operation and Development (OECD), government support for agriculture rose during 2012, ending a long-term downward drift and reversing the record lows recorded in 2011.

This support was documented in the 47 leading farming nations, which provide nearly 80 percent of the global farm output. This includes seven “emerging economies” that will soon be major players in the food and agriculture markets.

The OECD defines “support” as transfers to agriculture from government policies designed to support it. This money comes from consumers and taxpayers. This year, the Producer Support Estimate has risen to 17 percent of gross farm receipts in 2012 from 15 percent in 2011.

OECD Trade and Agriculture Director Ken Ash said wasteful policies of the past need to be moved away from to make sure “much needed innovation” is fully funded. This will also allow farmers to “respond to market signals” and governments to support wide-range farm reform.

Though this report saw a general rise in government support, the levels per country of this support vary widely. The highest support that countries recorded saw further increases, and countries with relatively low support continued to fall.

Some of the countries that saw sharp increases in this support have begun turning their policy toward a focus on self-sufficiency, according to the OECD. They also said food systems would be more efficiently improved by developing “safety nets” and reducing poverty.

The OECD said several multi-dimensional efforts are necessary to raise domestic production and improve access to imports and export markets. These efforts would also allow for the construction of emergency food reserves.

The report released by the OECD said “public investments for the sector overall should receive more attention.” They suggest investments that have “high social returns in the long run,” such as education, research and development, technology, and advisory services.