Archive for category: Partners In Health 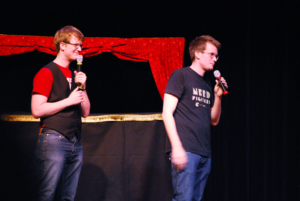 John Green and Hank Green, known as “the Vlogbrothers,” started a YouTube channel in 2007 called Brotherhood 2.0. It was a place for the two brothers to talk to each other through daily videos in hope of bonding. Over 10 years later, the Vlogbrothers have gained a 3-million-strong community based around learning and activism. The Green brothers also use their platform to put their own words into action. They host a Project For Awesome event each year that sends donations to charities are based on the number of viewers. Now, the Vlogbrothers’ Partners In Health partnership aims to increase access to maternal health care for women in Sierra Leone.

The Challenges in Sierra Leone

The situation in Sierra Leone has reached a crisis level. The country is in deep poverty with 60% of its citizens below the national poverty line. The beautiful terrain suffers from natural disasters and unpredictable weather patterns, which harms food production. The country struggles with health issues. There is limited access to even basic health care, a lack of clean drinking water and outbreaks of deadly diseases. A specific group that is suffering is mothers.

Sierra Leone is a deadly country for mothers to give birth. It has the highest maternal mortality rate in the world — over 300,000 mothers died from childbirth in 2015 alone. Sierra Leonean mothers die of easily preventable causes, such as hemorrhaging, lack of refrigeration for blood transfusions, unsanitary tools due to lack of clean water or lack of ambulances.

In the video “The Only Psychiatric Hospital in Sierra Leone,” John Green discussed his journey to Sierra Leone’s only mental health hospital. This is a country with a population of over 7 million people. Green noted that there was no electricity, water or lighting within the hospital. The infrastructure was crumbling and the medicine cabinet had been close to empty for years. With the help of Partners In Health, a generator was able to provide the hospital with electricity, better infrastructure and hundreds of medicines for patients. Most patients that go into the psychiatric ward are now able to walk out and live healthy lives.

In 2019, John Green uploaded “Why We’re Donating 6,500,000.” In the video, he discussed the trip to Sierra Leone and told the story of a minimum wage health care worker called Ruth. Her job involves identifying women who are at high risk during pregnancy. While with Ruth, Green noticed her slip $2 in her patient’s pocket. She had wanted to make sure her child could eat that day. Green reminded his viewers that “It required far more sacrifice and compassion for Ruth to make that donation than it does for our [Hank and John’s] families to make this one.”

The Vlogbrothers Road to $25 million

Since 2007, the Vlogbrothers have hosted an annual Project For Awesome event. It is a 48-hour fundraising event where the money goes to “decreasing world suck.” The project has the potential to raise thousands of dollars toward the Vlogbrothers’ Partners In Health work. Additionally, its merch store gives over 90% of its proceeds to Partners In Health. The rest of the store’s profits goes toward paying artists and employees.

Still, the goal of $25 million comes across as impossible. However, John explained that “We’re already more than halfway there.” In addition to the Vlogbrothers’ Partners in Health $6.5 million donation, a group of donors offered to match up to $120,000 worth of donations each year. Green explains that to reach his target, the organization needs to raise a little over $1 million a year.

Partners In Health has already begun important work. It employs over 450 Sierra Leonean citizens and provides food across the country. In 2019, it marked the third year in a row where no mother died from preventable pregnancy causes. Hospitals were able to have running electricity and water as well as establish a running ambulance. With more investment in health care, the numbers will only continue to improve. With focus, resources and dedication, Sierra Leone’s mothers have a better chance of surviving.

John Green noted in his video that the solution to maternal deaths is not a simple one. “It isn’t ambulances or clean water or electricity or more health care workers. It’s ambulances AND clean water AND electricity AND healthcare workers AND much more.” Green went on to say that “systemic issues demand systemic, long term solutions.” With the Vlogbrothers’ Partners in Health partnership, the future of Sierra Leone’s mothers looks brighter than ever. Anyone can help the cause by donating to the Vlogbrothers’ campaign or visiting its merch store.