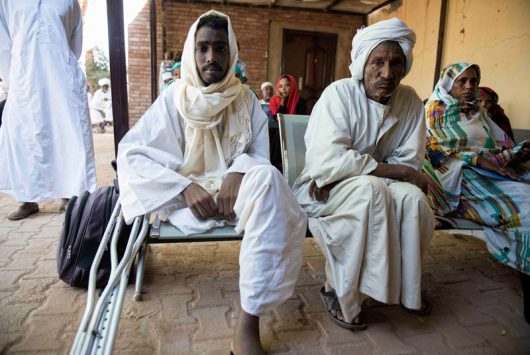 One of the top diseases in Sudan is mycetoma: a devastating illness caused by a fungal infection of the skin and bone. A causative organism, such as an infectious fungal spore, will enter the body through an open wound or abrasion and works its way through skin and tissue until it colonizes bone material. The disease can be treated with antifungal medication, but the currently available drug is only 30 percent effective and too expensive for the populations at risk.

The populations most likely to contract mycetoma are rural, isolated communities that fall within the “mycetoma belt,” including Venezuela, Chad, Ethiopia, India, Mauritania, Mexico, Senegal, Somalia, Sudan and Yemen. There is an especially long history of Mycetoma in Sudan beginning when the country produced the first report on the disease in the early 1700s, earning its reputation as the mycetoma homeland.

Generally, people in affected communities have limited access to healthcare and will contract mycetoma from walking without protective footwear. The mycetoma-causing fungus enters the body through a prick or scape on the foot. Over time, the infection will spread to the individual’s bone and they will lose the function of the affected limb.

Unable to travel long distances for medical attention, the individual is commonly forced to amputate. If they do not die from infection, many patients will suffer from additional postoperative complications, as their community healers don’t have the resources to perform safe and sanitary amputations. Mycetoma can be passed from person to person if contact is made with an infected area or surface harboring mycetoma-causing organisms.

The worst part about mycetoma is how little the world knows about its causes and symptoms. Mycetoma is so neglected that it just recently made the World Health Organization’s list of Neglected Diseases in May 2016, though cases date back more than 300 years.

While the disease is widespread, mycetoma research in Sudan is historically misrepresentative. In previous years, when the disease was not included in the WHO list of Neglected Diseases, mycetoma went unreported as doctors and healthcare workers were not actively seeking out cases.

Only two large-scale epidemiological studies for mycetoma research have ever been conducted to estimate prevalence throughout an entire country, in Mexico and Sudan. Both studies ended by 1985, rendering the results incredibly outdated.

Besides the two nation-wide studies, several single-center studies have attempted to perform a meta-analysis using specific cases from various countries. A 2014 study used cases from India, Mexico, Niger and Sudan to estimate the prevalence per country and found that prevalence ranked between 3.49 and <0.01 cases per 100,000 inhabitants.

While the disease may not be accurately represented through numbers or statistics, it has a palpable, multiplying effect, as infected individuals cannot work, attend school or perform manual labor. Thus, not only does one case affect multiple people, but the disease creates a disastrous cycle wherein a sick individual loses the ability to walk, cannot reach medical professionals and goes unreported.

An organization called Drugs for Neglected Diseases (DNDi) recognizes the severe lack of attention paid to mycetoma within the medical community. This past May, DNDi launched a clinical trial for the new antifungal drug Fosravuconazole. Starting in July, Fosravucinazle will be investigated in a randomized controlled experiment, alongside the current medicine, itraconazole.

DNDi has chosen to conduct the study in Sudan, at the Mycetoma Research Center at the national university is in Khartoum.

To put matters into perspective, the Sudanese state of Gezira yields over 80 percent of the total number of reported cases at the Mycetoma Research Center. However, a Gezira resident would need to travel 118 miles to get to Khartoum, making the journey financially and logistically difficult, since the majority of patients are of low socioeconomic status.

Out of all the cases, 76 percent of the patients were male, while 64 percent were under 30 years old. Additionally, 28 percent were students. These numbers indicate how devastating the disease is for many people besides the infected individual, as Sudanese Men under 30 are usually primary providers for their families. Not to mention that a disease that impairs a student’s ability to go to school lessens the individual’s chance of transcending poverty.

DNDi researchers are hoping to discover a higher success rate with Fosravuconazole and gain enough regional support to partner with a regular manufacturer. Dr. Nathalie Strub-Wourgaft, medical director for the organization, said the team is “very excited about the possibility of a new treatment against this terrible and neglected condition,” as “patients have received little attention and virtually no research.”

The neglected history of mycetoma speaks to larger issues within the global health community. The disease creates a cycle; infected individuals are too isolated to be treated and too few in number to capture the attention of countries who are in a position to offer assistance.

DNDi mycetoma research in Sudan is a much needed step in the right direction. Hopefully, the clinical trial will demonstrate how important it is for the international community to investigate other neglected diseases, especially those which have had a multiplier effect in impoverished communities.