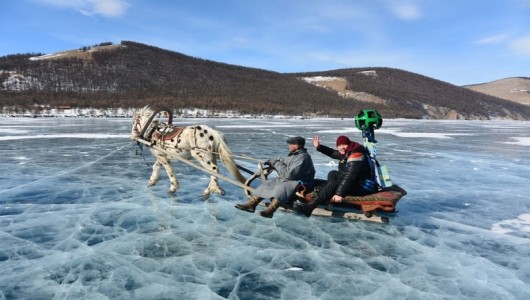 Since its launch in 2007, Google Street View, an extension of Google Maps, has provided users with realistic views of locations they might like to visit. People can actually navigate entire countries without leaving their homes thanks to these technologies and the number of popular tourist destinations has greatly increased.

Google Street View actually used their Google Trekkers—15 fixed-focus lenses with 360-degree panoramic shots every three meters—to capture incredibly important aspects of Mongolian culture. Nadaam, also known as the Three Games of Men, was going on in the capital city of Ulaanbaatar on July 11-13 this year as the Google Trekkers made their way through. They were joined by CNN who covered the story.

Nadaam is a type of Mongolian Olympics composed of archery, wrestling and horse racing. The horse racing event is particularly interesting because jockeys are generally ages five to thirteen and are raised to ride horses even before they can walk. According to residents, the competition itself focuses more so on the skill of the horses and their compatibility with their riders rather than the rider’s command over the horses.

“So far, Google has captured breathtaking landscapes across five cities and six provinces including Ulaan Baatar, Darkhan, Khenti, Dornogovi, and Selenge,” and they’ve been mapping the area since Oct. 2014. Though falling copper prices and low investor confidence has placed Mongolia in financial difficulties, Google hopes to raise tourism profiles.

“At Khursgul Lake, the second-largest freshwater lake in Asia, the team trekked across its frozen surface on a horse-drawn sled, providing breathtaking views of Mongolia’s landscape.”

Including its projects in Mongolia, Google Street View has also managed to capture remote islands, the Pyramids of Giza and the Amazon Jungle. 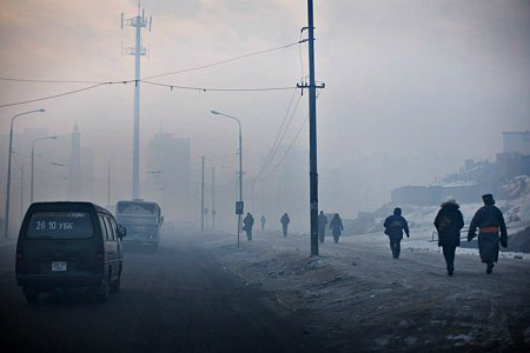 Extreme air pollution in Mongolia continues to place the country among the most polluted in the world, according to the World Health Organization. The WHO’s 2014 report on global air pollution ranks the developing nation the seventh most polluted country on the globe. With a population of only 2.9 million, pollution exposure levels are six to seven times higher than the most lenient WHO numbers. The population shift from rural to urban areas has intensified poor air quality in Ulaanbaatar and made air pollution a main concern for its citizens in recent years.

“Today, children are suffering from many unfamiliar illnesses caused by air pollution,” said Gerelchimeg, a mother living in one of Ulaanbaatar’s low-income districts. “As a mother, I am very worried about my children’s health and my neighbors’ newborns.”

The majority of Ulaanbaatar’s population lives in gers, traditional Mongolian dwellings where the burning of coal and wood for heat significantly contribute to the poor air quality of the city.

The Mongolian government has endorsed efforts to provide smokeless coal, improved stoves, gasification and solar heating to ger families in recent years; however, the challenge to fully implement environmentally-conscious legislation while allowing citizens to maintain their traditional lifestyles remains an issue for government officials.

“Many solutions will require Ulaanbaatar citizens to change technologies and learn how to use them,” said Gailius Draugelis, lead energy specialist at The World Bank. “The local private sector will need to supply and serve these technologies.”

The increase of vehicle use in Ulaanbaatar, from 75,000 to 300,100 between 2005 and 2013, spurred increased promotion of public transportation as well as legislation regarding the disposal of “older” and “too old” vehicles. The Mongolian government has also sought to reduce emissions from three major coal-fueled power plants in the Ulaanbaatar area by regulating the amounts of specific pollutants and endorsing power plant ‘scrubbers’ and other clean energy practices.

Despite governmental efforts to reduce air pollution on a variety of levels, air quality and conditions in Mongolia have improved little. Natural factors, such as geographic location and the topography of the capital city, have also contributed to air pollution and its effects on Mongolian health, including increased rates of non-communicable diseases.

Since 2010, the U.S. foreign aid agency the Millennium Challenge Corporation (MCC) has invested in a $41.5 million project to address the causes of air pollution in the poor outskirts of Ulaanbaatar. In only three years, the corporation sold almost 100,000 energy-efficient stoves and 19,000 ger insulation sets at subsidized rates. While green technology is only a temporary solution to the overarching issue of air pollution, the MCC’s contribution to public awareness and green research activity is an investment in the clean Mongolia of tomorrow.

Although air pollution is a major global health challenge in Mongolia and developing countries throughout the world, smart foreign aid gives hope for a cleaner future.

Since Mongolia broke ties with the former Soviet Union, it has been racked with instability and poverty. While the country enjoys democratic representation, its market economy has floundered and foreign assistance has become essential to Mongolia.

The U.S. government alone has appropriated over $11 million in foreign aid to Mongolia in 2014. That money has become an absolute necessity to the people of Mongolia, where 36 percent of the population lives below the poverty line.

One of the most striking problems this poverty has spawned is the issue of hunger and malnutrition in Mongolia. More than five percent of children under five are severely malnourished, and nearly 30 percent of the population is undernourished.

On top of that, Mongolia’s depth of hunger — a signifier of the intensity of food deprivation — is one of the worst in the world. Mongolia ranks 22nd in its depth of hunger rating, just behind North Korea.

While the incessant poverty in Mongolia is the primary cause of hunger there, a variety of other factors exacerbate the problem.

Its foremost problem is that of harsh winters which have devastated Mongolian livestock recently. In 2010, the UN allocated $3.7 million in emergency aid to Mongolia after a particularly cold winter that followed a summer drought. The winter consisted of heavy snowfall, high winds and thick ice.

All told, this winter — and recent winters like it — have killed approximately four million livestock, representing about 15 percent of national stocks. The loss of livestock has not only caused a national food shortage but a migration into cities which led to increased unemployment, inflation and poverty.

Inadequate preparedness for natural disasters is one of the primary causes of hunger in Mongolia. International efforts to stem the tide of malnourishment in Mongolia should focus on preparing the country for severe winter conditions in the future.

Though poverty remains a specter for Mongolia, if it cannot survive winters without suffering extreme depletion of its food stocks, the country will never be self-sustainable. Foreign aid to Mongolia must look to the root cause of its hunger problems rather than simply aim for generic poverty reduction.

Harsh winters have proven to be a major cause of hunger in Mongolia. Fortunately, it is a problem that can be overcome by establishing the proper protocol for disaster management.

Up until about 1990, Mongolia never faced any fears of living in poverty. Rural land specifically, and the large volume of land has been Mongolia’s source of food security and livelihood for centuries.

Mongolia owns approximately 838,853.13 square miles of land in which much of it is desert, but the arable land is quickly becoming depleted, polluted, or turned to desert.

Currently, 33% of people in Mongolia are poor, and over half of the country’s population is living in rural areas. This quickly happened after Mongolia’s large farms became private and hundreds of herders became unemployed and without government benefits.

Most of the rural poor live nomadic lifestyles, moving from area to area with their families in order to feed cattle and find food. Some families live in soums, or villages consisting of multiple families, and some rural families, particularly the nomads, live in tents known as ger. The benefit of living in soums is the ability to obtain some form of education, health services, and essential necessities.

Those living in rural areas rely on their animals for food and making money.

With much of the fertile land being utilized for feeding cattle, there has been a severe increase in land degradation. Mongolia has yet to find strengthening mechanisms for sustainable land management or a method to control desertification. Without these forms of protection, Mongolia is at an increasing risk of losing what little remains of one of their most needed natural resources: fertile land.

Desertification brings with it many struggles; drought and causing land to become irreparable are among the worst-case scenarios. With more and more of the land being overgrazed, little land will be left for agriculture, herding, and living. Mongolia is already naturally a very dry climate with little rainfall and plant growth, which is only worsened by the constant migration, over-cultivated land, and now competition for natural resources.