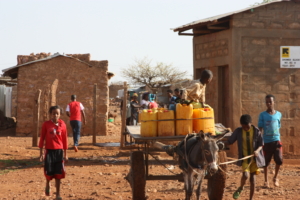 Militarism and instability are endemic to Eritrea. The degradation of civil society is a result of those two factors. Child poverty in Eritrea is rampant due to such foundations; however, the country is not without benefactors. UNICEF’s aid efforts are improving children’s health within Eritrea despite the current conditions.

Eritrea is one of the few countries that one can truly consider a fledgling state in the 21st century. After a decades-long secession war, the Eritrean government achieved full independence from Ethiopia in 1993. They solidified the totalitarian one-party dictatorship that has retained power since. A brief period of peace followed, during which promised democratic elections never materialized. Then, Eritrea’s unresolved border disputes with Ethiopia escalated into a war that lasted from 1998 to 2000. It killed tens of thousands and resulted in several minor border changes and only formally ended in 2018. In the wake of this war, the Eritrean government has sustained a track record of militarization, corruption and human rights violations that has continually degraded civil stability. As of 2004, around 50% of Eritreans live below the poverty line.

Eritrea’s Youth at a Glance

Housing around 6 million people, Eritrea’s youth make up a significant proportion of its population. Eritrea has the 35th highest total fertility rate globally, with a mean of 3.73 children born per woman. It also has the 42nd lowest life expectancy at birth at a mere 66.2 years, with significant variation between that of males (63.6 years) and females (68.8 years).

Under the guise of national security against Ethiopia, Eritrea has maintained a system of universal, compulsory conscription since 2003. This policy requires all high school students to complete their final year of high school at Sawa, the country’s primary military training center. Many are 16 or 17 years of age when their conscription begins, which led the U.N. Commission of Inquiry to accuse Eritrea of mobilizing child soldiers.

The Human Rights Watch’s (HRW) report also blamed Eritrea’s conscription practices for a number of grievances. Its prolonged militarization has wide-reaching effects on the country. Many adults end up in service against their will for up to a decade, but it is particularly damaging to Eritrean youth. Students at Sawa face food shortages, forced labor and harsh punishment. Many female students have reportedly suffered sexual abuse. Besides fleeing, “Many girls and young women opt for early marriage and motherhood as a means of evading Sawa and conscription.”

Further, “The system of conscription has driven thousands of young Eritreans each year into exile,” HRW claimed. HRW estimated that around 507,300 Eritreans live elsewhere. Because of its conscription practices, Eritrea is both a top producer of refugees and unaccompanied refugee children in Europe, resulting in child poverty in Eritrea as well as other regions.

HRW claims that Eritrea’s education system plays a central role in its high levels of militarization. It leads many students to drop out, intentionally fail classes or flee the country. This has severely undermined education access and inflated child poverty in Eritrea.

Eritrea currently has the lowest school life expectancy – “the total number of years of schooling (primary to tertiary) that a child can expect to receive” – of any country. Eritrea has reportedly made strides to raise enrollment over the last 20 years. However, 27.2% of school-aged children still do not receive schooling, and the country retains a literacy rate of only 76.6%. Illiteracy is much more prevalent among females than among males, with respective literacy rates of 68.9% and 84.4%. In general, girls and children in nomadic populations are the least likely to receive schooling.

As mentioned earlier, more than half a million Eritreans have fled the country as refugees. Around one-third of them – about 170,000, according to the World Health Organization (WHO) – now live in Ethiopia. A majority reside in six different refugee camps. As of 2019, around 6,000 more cross the border each month. Reporting by the UNHCR shows that “children account for 44% of the total refugee population residing in the [Eritrean] Camps, of whom 27% arrive unaccompanied or separated from their families.” Far from being ameliorated by domestic education programs, child poverty in Eritrea is merely being outsourced to its neighbors.

Children’s Health as a Site for Progress

Adjacent to these issues, UNICEF’s programs have driven significant improvements in sanitation, malnutrition and medical access. Its Health and Nutrition programs, among other things, address malnutrition by administering supplements, preventing maternal transmission of HIV/AIDS during birth and administering vaccines. Teams in other departments improve sanitation and lobby against practices like child marriage and female genital mutilation.

In its 2015 Humanitarian Action for Children report on Eritrea, UNICEF wrote that Eritrea “has made spectacular progress on half the [Millennium Development Goals],” including “Goal 4 (child mortality), Goal 5 (maternal mortality), Goal 6 (HIV/AIDs, malaria and other diseases) and is on track to meet the target for access to safe drinking water (Goal 7).”

Figures illustrate this progress in child poverty in Eritrea. Since 1991, child immunization rates have jumped from 14% to 98%, safe water access rates are up at 60% from 7%, iodine deficiency has plummeted from 80% to 20% in children and the under-five mortality rate sits at 63 deaths per 1000 births, rather than at 148.

Child poverty in Eritrea is a far cry from reaching a resolution, but it is not a lost cause.