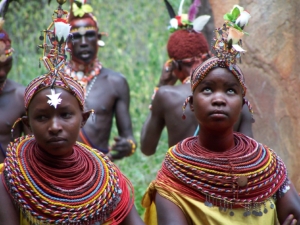 Lea Pellet, one of the delegates at the 1996 United Nations Women’s Conference in China, was very interested when nonprofit success was discussed. “One of the issues that came forth there was the recognition that big organizations were doing phenomenal work throughout the world, but there were a lot of pieces that really could only be handled by small groups. A church to a church, a school to a school, a women’s group to another women’s group.” With that thought, the Maasai American Organization (MAO) was born. Starting with domestic needs and then transitioning to international aid in health and education, MAO has flipped the script regarding non-profits.

Lea Pellet is a Wisconsin native and holder of multiple sociology and social work degrees from the College of William and Mary, Hampton University, Norfolk State University and Old Dominion University. She has served as a chair of the Department of Sociology, Social Work and Anthropology at Christopher Newport University from 1970 to 2006 and has also spent time as an Anthropology Field School Coordinator. Pellet founded the Maasai American Organization in 2000 and since then, the non-profit has worked with countries around the world. The organization’s name however, comes from their focus on helping the Maasai people of Kenya.

The Maasai American Organization is a 501(c)(3) nonprofit originally run through Christopher Newport University in Virginia. As the program grew, it began to focus on international interests; this began with a grant from the School of Public Health of Mexico. The budding  idea was to find indigenous groups with a handful of educated or skilled people within the community, like teachers and doctors. MAO would then pair these people with groups from the United States in a fashion that values person to person interaction and connection.

On a trip to Kenya with her husband, Pellet met a woman who was once part of a UN program. Pellet asked her to consider setting her sights on the Maasai people by providing them with both aid and education. Pellet went with a team into the most remote areas of the Maasai territory and encountered their incredible pieces of art. Later, it was sold to African American museums in the United States. From there, Pellet got serious about becoming an NGO (instead of remaining university-based) and renamed the organization the Maasai American Organization.

MAO put 300 Maasai girls through primary and secondary school in a culture that has historically not approved of education for girls. The organization’s focus was on educating girls who would return to the Maasai Mara and help improve their communities. Many of these girls would become nurses, teachers, entrepreneurs and social workers. MAO also helped build 10 preschools in remote areas, allowing some of the 300 graduated girls to be hired there as teachers. Most of the children coming to school have never heard Kiswahili or English. The children are typically taught by teachers from the urban area who have never heard KiMaa, the Maasai language. To eradicate language barriers, MAO teaches teachers to begin in native languages and then bridge to national languages if possible.

Most Maasai women were walking more than two hours to gather water from polluted streams. As a result, MAO put additional focus on the community’s acquisition of clean water. The organization installed deep wells where feasible and taught water purification techniques if wells could not be dug. Those wells made it possible for women to plant crops and even raise small herds of goats. Consequently, these changes improved the nutrition and health of children. MAO also constructed and staffed three family clinics, providing health officials until the educated girls were ready to take over.

Alongside her focus on Kenyan communities, Pellet felt the need to bring her work to Guatemala. MAO focused on educating Mayan girls to help build and staff health clinics. It also focused on developing markets for indigenous craft products and teaching women how to operate group craft businesses. The organization has built and supported a preschool and have moved approximately 50 Mayan girls on to successful school careers. One of the most significant contributions has been moving 80-100 women into entrepreneurship as glass bead weavers and jewelry makers.

Pellet personally oversees the most recent projects in Guatemala. She makes yearly trips there with a team to implicate different initiatives and work with the education and healthcare projects there. Her efforts have halted with the pandemic. She hopes to resume in the future when it is safe to do so.

Small nonprofits can have an incredible impact when working with low-resource communities. Here are a few ways that small initiatives like the Maasai American Organization can differentiate themselves from larger organizations:

There are many situations where personal interaction and one-on-one aid is more helpful than sending a dollar amount. Lea Pellet’s Maasai American Organization is a great example of a small nonprofit that has made a world of difference in the past, present and future of the Maasai and Mayan peoples.