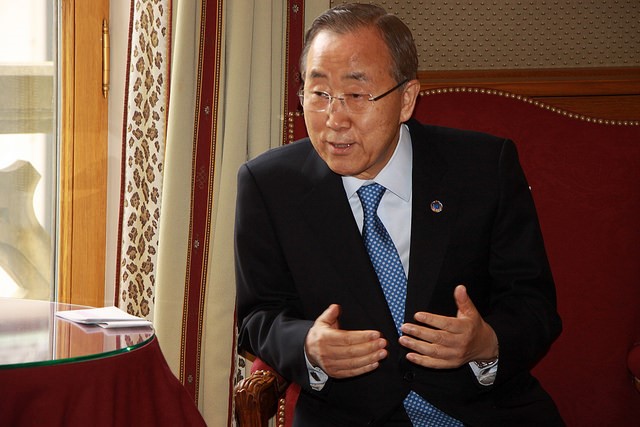 His comments came after the conclusion of the Sept. 19 U.N. Summit for Refugees and Migrants.

U.N. member states unanimously adopted the New York Declaration, which expresses the “political will” of world leaders to protect the rights and dignity of refugees, hence becoming advocates for refugees.

U.N. leaders urged world leaders to ensure all refugee children receive education within months of arrival in Europe. The declaration also called for an expansion of economic opportunities for refugees.

Civil unrest and Islamic extremism in the Middle East drove 1.3 million from their homes, most of these people have found political asylum in Europe. However, asylum does not always entail adequate living conditions.

Around 60,000 Middle Eastern refugees are currently stranded in Greece awaiting processing and relocation in Europe. The refugees are held in a massive tent city under appalling inhumane conditions.

In France over 1,000 unaccompanied minors live in squatter camps in and around the coastal town of Calais. The camp, which is called “The Jungle” by locals, is home to thousands of refugees hoping for a better life in the United Kingdom.

The U.N. Summit for Refugees and Migrants addressed the question of refugee food security. Ki-moon urged leaders to make policy decisions which would empower immigrants to seek and hold employment. To become sustainable, migrants need to have access to land, banking services and freedom of movement.

World leaders at the U.N. summit did more than just craft a paper promise. Under the U.N. directive, more children will be able to attend school and get an education. More immigrants will be able to seek safe, sustainable employment. By making poverty alleviation a top priority, the U.N. has opened a door to opportunity for some of the world’s most vulnerable people. 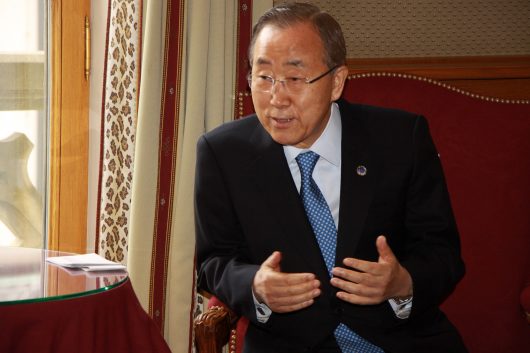 Recently, United Nations Secretary General Ban Ki-moon said it was time for women to lead the United Nations. As elections are approaching the end of the year, there are eleven candidates among which six are women. This could be a historic first time for female leadership at the United Nations since the organization was created 70 years ago.

Ki-moon said that it was high time now for a female leader. He further elaborated: “We have many distinguished and eminent women leaders in national governments or other organizations or even business communities, political communities, and cultural and every aspect of our life. […] There’s no reason why not in the United Nations.”

Generally, there are strong voices that call for a woman leader. There is an impatient demand, which is higher than ever, for women to lead the United Nations. The female candidates definitely have their chances and it’s now their time to shine.

People are excited to see how a female leader would continue using soft power and coalition tactics to pursue U.N. goals. The new leader will set the tone and vision of the organization for the next decade. A female leader could definitely bring a much-needed change.

Furthermore, the women aspiring to a leadership role in the United Nations demonstrate interesting qualifications and well-experienced cadres. Many have worked in their respective governments but also in handling many projects related to the United Nations. Each woman candidate can bring a whole lot of shift in the U.N. with their diverse practical experience.

Women have been underrepresented in the United Nations. A new female chief will certainly address this critical issue. This is part of achieving gender equality on a global, leadership level. A female U.N. chief will also shed the light on women groups and issues related to feminism, education and equality that would otherwise be overshadowed by superpowers in favor of other issues.

Another interesting fact is that women make up almost half of the population of the world. However, they only hold 25 percent of the U.N.’s highest positions. Thus, having female leadership at the United Nations would significantly change the view of women worldwide. The world would see women leaders as equally capable of handling international crises with high qualifications and potential. 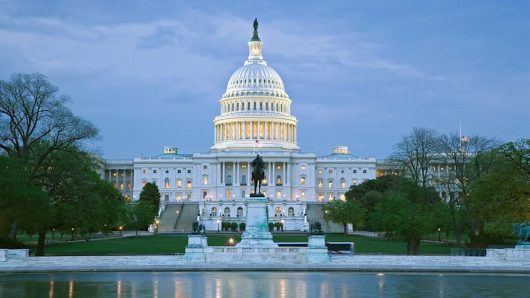 The bill has two main goals: create a group comprised of several organizations–including the Overseas Private Investment Corporation (OPIC), U.S. Agency for International Development, the Trade and Development Agency and the Millennium Challenge Corporation–which will help coordinate the U.S. government regarding creating reliable sustainable energy on the African continent, and effectively utilize the United States’ influence as a world power to build international support for African energy programs.

Next, the Reach Every Mother and Child Act, also introduced in 2015, seeks to end preventable maternal and newborn deaths around the world.

According to WHO, around 830 women around the world die every day from preventable causes related to pregnancy and childbirth, such as severe bleeding, infections, eclampsia/pre-eclampsia (high blood pressure that develops during pregnancy) and unsafe abortions. That adds up to over 300,000 women dying every year, of which 99 percent of those deaths occur in developing countries.

Finally, The Borgen Project supports the Food for Peace Reform Act of 2015, which would overhaul the current U.S. programs for providing emergency food aid around the world, involving:

· evaluating performance and cost-effectiveness of food products and programs for vulnerable groups, such as pregnant mothers and young children

Visit borgenproject.org/legislation for more information on global poverty bills and how you can help end global poverty by contacting your government representatives in the House and Senate. 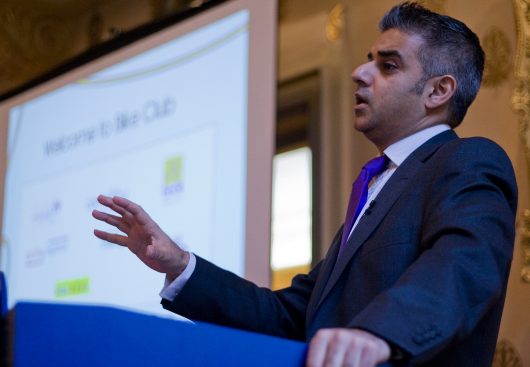 On May 9, 2016, Sadiq Khan entered the London City Hall to commence his new role as London’s duly elected mayor. His ascension to this role over Europe’s financial capital was a historic moment for economic equality and progression within London.

In his acceptance speech, Khan said, “I am determined to lead the most transparent, engaged, and accessible administration London has ever seen, and to represent every single community and every single part of our city as mayor for all Londoners.”

Over the last year, Khan has risen from a relatively obscure character in the British parliament to a world-renowned figurehead. His campaign was fraught with controversy over his reputation, and many did not trust his intentions as a politician. Why? Who is Sadiq Khan, and what is it that makes him such a controversial figure in British politics?

Sadiq Khan is the first Muslim to become mayor of a major Western city. And though some radicals believe the world is coming to an end with such a change, this historic event is generally viewed as a positive political breakthrough. London specifically sees this significance, but various countries throughout Europe and the West agree.

Originally planning to become a dentist, Khan instead pursued law after a teacher commented on his talent for arguing. A few years later, he graduated from the University of London and began his career as a human rights lawyer.

He quickly received attention from various high profile cases, but after a number of years as an attorney he left his practice in order to become more involved in politics. The rest is history.

In his new job as mayor, Khan plans to focus on two central points: significant reductions in poverty and inequality. CNN has observed that the divide between rich and poor in the financial powerhouse of Europe has been steadily increasing.

Statistics show that 27 percent of the nearly 9 million inhabitants are living below the poverty line. Additionally, prices for travel and housing are rising and jobs cannot compensate for the cost of living in London.

Khan has listed a number of strategies that he will implement to improve the current financial situation. First, he intends to attack the housing crisis currently facing London.

On his campaign webpage he writes, “For young families and individuals on average incomes, housing is increasingly unaffordable – with home ownership a distant dream.” Khan also intends to make affordable homes a focus of his tenure through construction reform. He plans on stopping the outsourcing of property to foreign investors.

The new mayor also plans to address ethnic and gender inequality. Khan is committed to tackling each of these issues in order to help London stem the tide of its inflation while bringing poverty and inequality rates down. 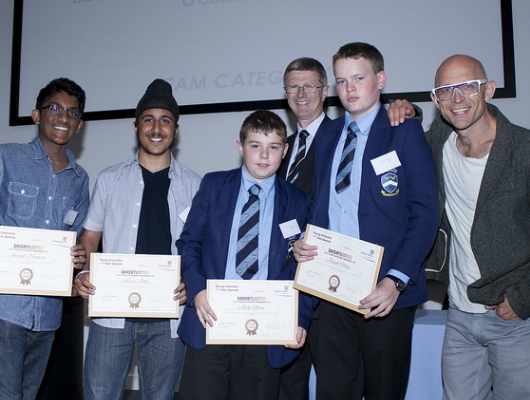 To innovate is to, “make changes in something established, especially by introducing new methods, ideas, or products,” according to Dictionary.com. Young innovators are bringing a whole new dose of innovation to the world.

When it comes to alleviating poverty, there is no shortage in the need for innovation. Various governments, institutions and organizations are constantly searching for new methods to reduce the global issues that both cause and perpetuate poverty.

On Nov. 9-10, UNICEF and The Ministry of Foreign Affairs of Finland met for their Global Innovations Summit. Leaders, CEOs and young innovators met to discuss ideas to get products to those who most need them.

During the two-day event, people discussed what the future looks like and ways to expand success. Overall, the goals of the summit were to:

One of the unique parts of this summit was the inclusion of young innovators. Included as key speakers, children and youth were able to present what they have come up with to better their own circumstances in poverty.

Vandy, a twenty-year-old from Sierra Leone, gained inspiration to get involved with innovation because of outside influence.

At the summit he said, “I got inspired to get involved in innovation by my mentor David Sengeh, a PHD student at MIT. In terms of addressing the electricity challenge in my community I got inspired by a young Kenyan who built a windmill device that completely solved the challenge of no electricity in his village.”

Through the stories and ideas of the young innovators, leaders gained a better insight into what the future generations need to be successful.

These youth are working to change their own situation, showing the power of letting them aid in finding solutions.

Another of the young innovators, Altin from Kosava, provided advice to other young people considering getting involved.

“I don’t want to sound like a philosopher…giving up is easy, it’s easy to have a normal life and just do what everybody else is doing, but fighting for what we believe in is what keeps us alive as individuals. We might start alone, but sooner or later a good cause will always bring good people together.”