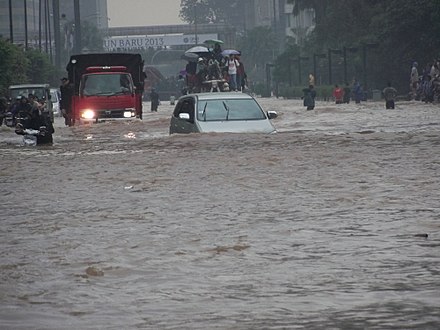 Citizens of Jakarta rang in the new decade with fervor and enjoyment, accompanied by slowly rising brown floodwaters. The citizens ascended to the streets, but before long some found themselves swept up in one of Indonesia’s worst floods in the past 150 years – one that the country could not have prepared for. The floods have displaced over 400,000 people and 66 people have died within the first week of 2020. But importantly, this crisis of flooding in Jakarta has disproportionately affected the impoverished regions of the city, which received little public attention.

Jakarta, like many quickly expanding metropolitan areas today, faces the challenge of a rapidly increasing population accompanied by many migrants to the city – a number which experts expect to reach 70 percent of Indonesia’s population by 2025. This rapidly expanding population makes it difficult for the current infrastructure and housing to adequately accommodate the increasing demand, therefore increasing construction rates and skyrocketing real estate prices. As a result, the poorest citizens are living dangerously close to areas that flood almost every year under normal conditions.

Unlike typical cities, half of Jakarta lies under sea level. The city has been sinking roughly 10 centimeters every year due to years of uncontrolled groundwater draining by large companies. This sinking conjoined with regular seasonal flooding creates enormous problems in terms of designing infrastructure. Further, increasingly dramatic typical weather patterns in Jakarta have made the extreme weather events less predictable, specifically flooding in Jakarta. The combination of dramatic weather events and poverty in Jakarta creates a cyclic system where temporary aid seems to be adequate when in reality it only serves as a temporary fix, allowing the cycle of destruction to propagate.

The government of Indonesia has taken measures to house displaced residents of Jakarta. Additionally, most of the electricity in the area is up and running again. However, the long term goals of President Joko Wikodo reflect a sentiment that does not seem to include the protection of citizens and the prevention of these incidents. Instead of continuing plans for a sea wall to protect the city from rising sea levels, President Wikodo intends to move the capital to a less populated, drier site on Borneo island. Though this might be a valid idea, this all but abandons the poorer communities in Jakarta, leaving these citizens behind without the resources to move.

In the meantime, many aid measures occurred to help with the most recent round of flooding in Jakarta. All of the local shelters have sufficient food and medical supplies to harbor the 400,000 displaced people. Moreover, most of Jakarta’s citizens returned to their homes by the second week of January 2020. Aid methods, ranging from foreign financial and medical support to internal medical workers, continue to prove an effective yet temporary fix for the greater problem of the flooding in Jakarta. 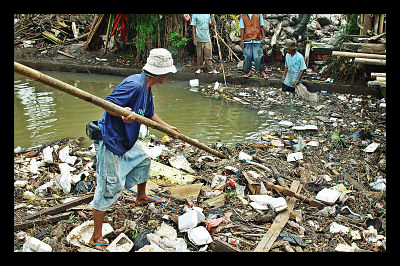 There are over 28 million people in Indonesia considered to be poor according to national standards. The Multidimensional Poverty Index, or MPI, focuses on standards of living and measures 10 indicators of multiple deprivations in a household. The 10 indicators include issues of education and health. To be considered multi-dimensionally poor, a person needs to be deprived in at least three out of the 10 indicators.

The population of Jakarta is 10 million at night and increases to 11.2 million in the day as individuals travel into the city for work. As of 2014, the poverty rate and Gini coefficient ratio, a measurement tool for the gap in income, have increased immensely due to increasing rates of inflation and the weaker rupiah. The result is a higher poverty index.

The poverty index ratio increased to 8.9 percent from eight percent in the previous year. The country average for Indonesia is 8.3 percent. The coefficient ratio has gone from a measurement of .364 in 2013 to .436. The ratio illuminates the income distribution among the city’s population as well as the inequality of the economy.

There has been an increase in the poor population from 3.7 percent in 2013 to 4.9 percent. Based on the population of Jakarta, the number of poor has increased from 371,000 to 412,790. Due to poverty, issues of malnutrition, no proper sanitation, lack of electricity and limited educational opportunities are often issues occurring in tandem.

It is important that proper indicators are used to determine the amount of the population that is poor in order to correctly assess their needs. In the words of Amartya Sen, author of the book, “Development as Freedom,” poverty should be seen “as a deprivation of basic capabilities, rather than merely as low income.”

Certainly, Jakarta’s status as the capital of the Association of Southeast Asian Nations (ASEAN) contributes greatly to the city’s rising position. Furthermore, the emergence of the ASEAN Economic Community, a quasi-European Union style economic community minus a common currency due to take off in 2015, is also another factor that helps to make Jakarta an up-and-coming Southeast Asian city.

Jakarta, over the past few years, has invested immensely in improving its once inadequate infrastructure. However, it is the city’s improvements in other fields such as stability and security that has put it on the map. Areas involving Jakarta’s population such as income equality, stability, healthcare cost, minimum wage and security are those that have fared the best.

Jakarta’s improvements also extend to the fields of information exchange and high gross domestic product growth rate. In terms of the city’s once feeble infrastructure, today’s Jakarta has been developing its mass rapid transit system. Its groundbreaking ceremony was held in late 2013. This project will begin operating in 2017-2018 and it will help to facilitate the daily commute of the residents of the city and its surrounding areas.

Furthermore, Bangkok, Thailand, its future appearing promising in 2008, has been experiencing instability for the past few years, thus eliminating Jakarta’s regional competitor. John Kurtz, A.T. Kearney’s Asia-Pacific head, stated that the city’s growing political and economic importance is attracting both domestic and international talents and investments.

The city’s rise in importance and prosperity is certainly a stunning achievement. The city’s transformation into the region’s powerhouse is undoubtedly a testament to development as a tangible and a feasible process, not just an illusive rhetoric.