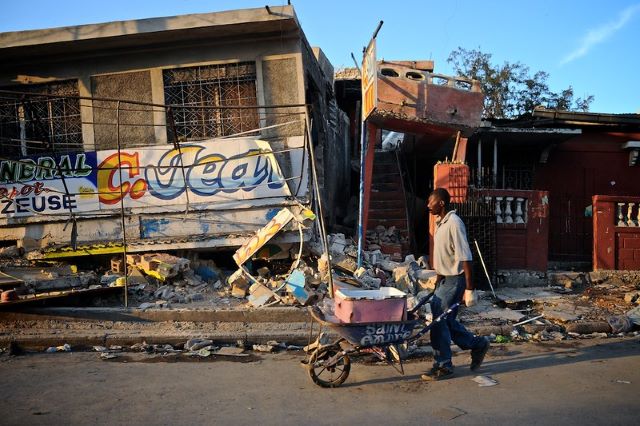 In 1804, Haiti gained its independence from France, yet it took until 1862 for the U.S. to recognize Haiti as a nation. In the 20th century, U.S. military forces began a 19-year military intervention in Haiti that lasted until 1934. Despite being the “second-oldest republic in the Western Hemisphere after the United States,” Haiti has struggled to maintain a consistent and reliable democracy, according to the Office of the Historian. The Haiti-United States relationship has significantly strengthened over time, with the United States as a regular donor to Haiti. In an already unstable nation, the recent assassination of Haitian President Moïse in July 2021 has led to further instability in the nation, prompting urgent humanitarian assistance.

Following the 2010 earthquake that paralyzed Haiti, the United States provided more than $5 billion worth of aid aimed at supporting “longer-term recover, reconstruction and development programs,” according to the U.S. State Department. In the aftermath of the earthquake, U.S. economic efforts have allowed for:

As “Haiti’s largest trading partner,” the U.S. is involved in Haitian sectors such as “banks, airlines, oil and agribusiness companies” as well as “U.S.-owned assembly plants,” according to the U.S. State Department. Tourism, medical supplies and equipment, modernization of Haitian infrastructure and clothing production are areas of opportunity for U.S. businesses.

Despite the successes of the Haiti-United States relationship, the World Bank estimates that, in 2020, almost 60% of the Haitian population lived in poverty. These statistics make Haiti the most impoverished nation in the Latin America and Caribbean region.

A shift from communism to democracy in Haiti has the ability to strengthen the Haiti-United States relationship and provide economic stability. Political and civil unrest has been ongoing since July 2018 and “violent protests” in the nation exacerbate Haiti’s plethora of issues. Among other issues, a growing unemployment rate, inflation rising to 20% and the Haitian currency depreciating by 30%, contribute to an ailing nation. Furthermore, the nation experiences regular fuel shortages and businesses struggle to keep their doors open. Due to the high poverty rate, about 33% of the population faces “crisis- or emergency-level food insecurity.”

While Haiti showed signs of promise when it held a democratic presidential election in 2017,  its “local and parliamentary elections” that were scheduled for October 2019 did not occur. Because democracy in Haiti is not consistent, this leads to nationwide instability and unrest.

The Assassination of President Jovenel Moïse

On July 7, 2021, Haitian President Jovenel Moïse and his wife, Martine, were attacked in their residence in the country’s capital, Port-au-Prince. The president was killed in the attack and his wife was severely injured but did not suffer any fatal wounds.

Moïse’s presidency, which began in February 2017 after winning an annulled 2015 election and a second election in 2016, “was marked by controversy.” His appointment sparked protests throughout the country, with citizens citing “economic underperformance and corruption” as the reason. Since the beginning of 2020, Moïse ruled by decree and allegedly attempted to grant himself and close confidants “immunity from prosecution” on several occasions. In 2020, human rights abuses connected to gang violence caused two members of Moïse’s government to be sanctioned by the U.S. government.

US Solidarity and Support

U.S. President Joe Biden has spoken on the future of the Haiti-United States relationship following Moïse’s assassination. Recently, Biden released a statement of mourning over Moïse’s assassination and uncertainty about the future of Haiti. “We condemn this heinous act and I am sending my sincere wishes for First Lady Moïse’s recovery. The United States offers condolences to the people of Haiti and we stand ready to assist as we continue to work for a safe and secure Haiti,” says Biden.

The instability in the aftermath of Moïse’s assassination leaves the future of the Haiti-United States relationship in question. However, by committing to democracy, the Haitian government can work toward a stronger economic partnership between the two nations.

UNICEF is working to provide aid to more than 1.5 million Haitian people experiencing “constrained access to clean water, health and nutrition, disrupted education and protection services” amid the political instability and the ongoing COVID-19 pandemic. In July 2021, UNICEF reported that “Haiti is the only country in the Western Hemisphere where not a single dose of the COVID-19 vaccine has been received.”

To address this, “UNICEF will support the distribution, transportation and storage of COVID-19 vaccines” to improve the vaccine rollout. Starting three years ago, UNICEF has provided 920 solar-operated fridges in Haiti, “to strengthen the cold chain, mainly in remote areas where electricity is unreliable.” Today, 96% of Haiti’s health centers possess solar fridges for medicinal cold storage.

By mitigating Haiti’s domestic hardships, there is greater hope for a stronger Haiti-United States relationship in the future. The efforts of global humanitarian organizations provide a glimmer of hope in a tumultuous political landscape.