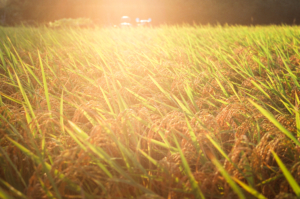 Rice is a staple crop in Asia that provides 30-72% of the energy intake in the region. Many children in these countries rely on meager amounts of rice and almost nothing else. Enter genetically modified (GM) rice. GM golden rice is a revolutionary modified rice crop, characterized by its golden color and vitamin A fortification. This biofortified crop works to alleviate the issue of malnutrition in Asia, especially among children.

In Bangladesh, China, India and elsewhere in Asia, there is a vitamin A deficiency problem. Annually, vitamin A deficiency results in the death of several million children and blindness in 250,000, according to a study done by WHO. Half of these children die within 12 months of losing their sight.

GM golden rice allows for beta-carotene (a Vitamin A precursor) synthesis in the edible portion of rice. This process may prove to be a promising remedy to this widespread vitamin deficiency. The body can actually use beta-carotene in the edible portion of rice, rather than the rice’s leaves. Not only is it usable, but it can supply 30% to 50% of a person’s daily vitamin A requirement.

Besides the nutritional benefit, GM golden rice also lasts longer than its non-GM counterparts. A Purdue University researcher found that some GM foods have an increased shelf life by a week longer than it would have originally. Foods that can stay fresher longer help impoverished regions store food and aid food distribution across long periods of time.

Furthermore, modified foods, like GM golden rice, are routinely screened for safety. Simon Barber, director of the Plant Biotechnology Unit at EuropaBio, the European biotech industry association, stated that before anything may be imported into Europe and used as animal feed or as an ingredient in food for humans, it had to travel through a security approval process.

In addition, the two genes inserted into GM golden rice, plant phytoene synthase and bacterial phytoene desaturase, are innocuous to the human body. Further, Dr. Russesll Reinke, IRR Program Lead for Healthier Rice,  stated that test trials in Australia, New Zealand and the U.S. found this rice to be safe for consumption.

As technology rapidly evolves, people will have reservations about the unfamiliar processes involved. However, GM golden rice has continued to be a proven and effective supplement for adequate nutrition. With new technological solutions, like GM golden rice, food shortages can continue to decrease.