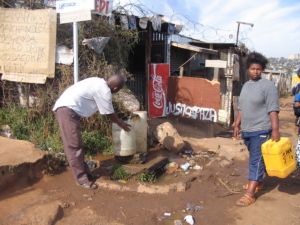 Severe flooding has recently devastated the eastern coast of South Africa, namely the province of KwaZulu-Natal after heavy rains pounded the province starting on April 11, 2022, and lasting several days. More than 400 people died from the initial flooding in April alone. Heavy rains prompted more flooding over the weekend of May 22 and 23 pounding the region even more. Floods destroyed thousands of homes which has only exacerbated the housing crisis that had already existed in South Africa for decades. KwaZulu-Natal did not even have a chance to begin rebuilding before these most recent floods worsened the devastation. Relief efforts have begun again as hundreds of people are missing or possibly dead and tens of thousands have experienced displacement.

The eastern coast of South Africa is no stranger to floods and heavy rains during the Autumn and Spring seasons. A cut-off low-pressure system, which is not uncommon in South Africa this time of year, triggered these most recent floods. However, this intense low-pressure system produced an abnormally extensive level of rainfall in the region in April. There is a chance that the heaviest downpours took place between April 11 and 12 as some areas of KwaZulu-Natal witnessed more than 30 cm of rainfall. Scientists point to changing weather as a likely reason behind the increased severity of this low-pressure system, namely due to the rising temperature of the Indian Ocean leading to more moisture in the atmosphere over southeastern Africa.

KwaZulu-Natal is among the poorer provinces in South Africa with the second-highest amount of people living in poverty behind only the Eastern Cape province. Equal access to safe housing in South Africa has long been an issue for the poor. The South African government claims it has attempted to address the nationwide problem that has plagued the country for decades, yet the recent floods have only further exacerbated the housing crisis. This crisis left a big impact on KwaZulu-Natal as it is home to Durban, one of the largest urban areas in the country.

Dating back to Apartheid the majority of the black population in South Africa did not have equal access to safe housing. As a result, many people had to build their own homes, often in less inhabitable areas outside of cities. These hand-built homes often resemble shacks or sheds as the owners built them out of whatever they could get their hands on. As the number of these homes grows in a certain area and begins to resemble a neighborhood, it becomes recognized as an informal settlement.

Unfortunately, the high death tolls and much of the devastation from these floods can relate to the high proportion of these informal settlements that house the country’s poorest. Estimates determined that 11.8% of South Africa’s population lives in informal settlements across the country. In KwaZulu-Natal, many of the informal settlements are located in valleys and thus are more prone to flooding which the hand-built homes don’t stand a chance against. Notably, April floods destroyed more than 4,000 homes alone with the majority being informal settlements which have only exacerbated the housing crisis. Include the fact that there are more than 40,000 who lost their home and an even more worrying picture appears. These people will need access to clean water, food and shelter.

Not only did floods destroy local homes, but they also impacted the local infrastructure. Floods damaged a local water treatment facility in the town of Umdloti thus limiting the area’s access to clean water. Floods swept away many roadways and destroyed bridges making it difficult for transportation in the area among victims trying to escape as well as rescuers attempting to reach those in need. According to provincial Transportation and Community Safety MEC Peggy Nkonyeni, it will cost the government over R12.4 billion to restore the province’s road infrastructure alone. As the government focuses its rebuilding efforts on infrastructure, it would also be an opportune time to attend to the longstanding housing crisis that recent floods only exacerbated.

The government claims to have built approximately 2.7 million low-cost homes over the past 15 years, yet there are still an estimated 2 million South Africans on a list waiting for the home they were promised. Its temporary accommodation sites are necessary for the short term to help the displaced ones, but it is imperative that the government addresses the longstanding lack of affordable and safe housing. Although the past two months have been very difficult, South Africans can now look forward to the typically drier months of June and July as an opportunity to recover and rebuild.