In the 12 months prior to June 2016, nearly 1.3 million Kenyan households were connected to the grid for the first time. This remarkable achievement raised Kenya’s national connectivity rate to 55 percent from a mere 27 percent in 2013.

The recent push for Kenya’s energy access is part of the government’s goal to achieve universal energy access by 2020, a project known as the Last Mile Connectivity Project.
Development experts say that electricity plays a major role in improving many facets of life. Everything from education and agricultural productivity to employment opportunities can improve. Across the African continent, nearly 600 million people, or 70 percent of the population, do not have access to electricity. By reaching its goal, Kenya would become the first African country to achieve universal access to electricity.

To reach its goal, Kenya aims to move from 55 percent to a near universal access rate of 95 percent in just four more years. Such a leap took the U.S. nearly 26 years to accomplish.

Recent feats in energy access prove that Kenya is determined to fulfill its commitment, despite the far-fetched implications of the mission. The jump from 27 percent to 55 percent took Kenya a little more than three years; in the U.S., it took about eight years to increase access by a similar amount.

The next step in Kenya’s energy access plan is to ensure that 70 percent of Kenyans have electricity by the end of this year, hopefully translating to more productivity and an expansion in the job sector. The government’s strategy involves investing heavily, which has proved extremely effective as the government has already secured over $600 million from various international donors.

Kenya’s energy access initiative also acknowledges outside constraints that are keeping people from accessing electricity. The government reduced the connection charge by over 50 percent in the past year.  Paying bills in installments is also now an available option. The adjustments in utility finances allow more citizens to realistically include paying for electricity in their budgets.

The Kenyan government’s commitment to achieving universal energy access by 2020 is looking more practical and obtainable than ever. Hopefully, the country will soon make history by achieving its intended goal. 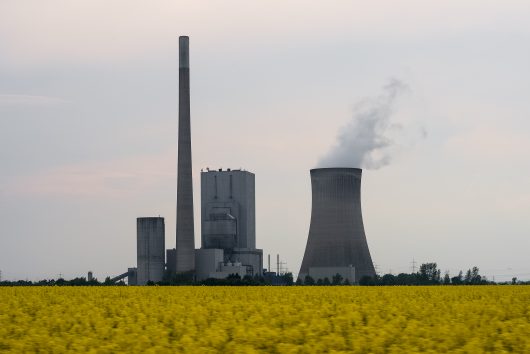 This November at an annual U.N. climate change conference, President Francois Hollande announced that by 2023, France will no longer rely on coal for any of its energy. The country already derives over 75 percent of its electricity from alternative methods and President Hollande’s announcement indicates that France is to close all coal power plants.

Besides the heavy release of CO2 into the atmosphere, coal as an energy source is problematic in many ways. The mining and extraction process for obtaining coal can have severely detrimental effects on the environment. The process can cause the destruction of landscapes and habitats, deforestation and erosion, contamination of groundwater, air and dust pollution and the displacement of communities.

Coal mining releases methane into the atmosphere. In terms of contributing to climate change, methane is about 84 times as powerful as CO2. On top of this, coal mining is a very dangerous job and can often have harmful effects on workers’ health. Those who inhale coal dust can suffer from black lung disease, cardiopulmonary disease and hypertension.

France’s decision to close all coal power plants comes in the wake of The Paris Agreement, an agreement made between 195 countries in 2015 to set the world on track to avoid dangerous climate change.

The country has become a leader in low-carbon energy production by increasing its use of nuclear fission, which produces many more health and environmental risks than fossil fuels. The country creates so much nuclear energy that it is able to export much of it to neighboring nations, bringing in substantial domestic revenue. The decision to cut all coal energy production by 2023 will even beat the United Kingdom’s decision to do the same by two years.

The announcement shows that France is committed to the Paris Agreement and the radical changes that come along with it. The country passed a bill in September banning the use of plastic cups, silverware and dishware, which will be implemented in 2020. France is the first country in the world to pass such a law.

Countries such as Germany, Finland, the UK and Canada are following France’s example and committing to similar ecological goals. The U.S. gets about 33 percent of its energy from coal and President-elect Donald Trump has not yet outlined a plan for reducing coal production.

Overall, France’s commitment to close all coal power plants by 2030 is an example to follow. The goals of the Paris Agreement require concrete dedication to stopping climate change, and France and President Hollande recognize this.