Archive for category: Education in India 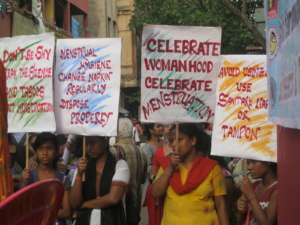 The stigma surrounding menstrual periods continues to plague India. Due to the frequent lack of sex education and conversation about periods, many Indian girls grossly lack education about their cycles.  Local period taboos and social media moral police trolls widely shame girls about their menstruation. In fact, period taboo is leading to premature hysterectomies in India.

These period taboos significantly impact poorer women living in rural areas including Bend and  Sangli. These women migrate to the more affluent western “sugar belt” districts to work for six months as cutters in the sugar cane fields.  Cane cutting contractors hesitate to employ women who menstruate because they assume that they will miss a day or two a month due to their periods.

Because sugar cane cutting is frequently a family’s primary source of income in rural India, thousands of menstruating women have been electing to have hysterectomies, which are irreversible surgeries, to eliminate the “problem” of their period.

Menstruating women are frequently banned from religious, social and work environments during their cycles.  Indian society considers periods impure and girls who have their periods dirty.  Uneducated parents rarely prepare their daughters for their menstrual cycles, so when they arrive, fear and anxiety plague young women. Due to unsanitary lavatories and lack of access to sanitary products, 23 million Indian girls drop out of school after they get their periods. They also fear mocking from classmates for staining.

What is a Hysterectomy?

A hysterectomy is a surgical procedure that results in the removal of a woman’s uterus and, in some cases, her ovaries and fallopian tubes. In doing so, a woman loses the ability to become pregnant, will not menstruate and may experience a reduction in hormone production.  After undergoing a premature hysterectomy, many women must undergo hormone therapy to stay healthy and prevent further health complications.

In rural India many women feel as if they must eliminate their menstrual cycles entirely in order to work. Furthermore, due to the lack of education on the subject of menstrual cycles, doctors at private hospitals easily persuade women to undergo the expensive procedure in order to continue working as cane cutters.  A large percentage of those women are in their 20s and 30s, far younger than the age when experts usually recommend hysterectomies.

Roli Srivastava, author of the column. “Pushed into Hysterectomies” in The Hindu, describes a distinct pattern:  Private hospital doctors coerce poor illiterate women into a premature hysterectomy. These women, who present with easily treatable symptoms such as white discharge, an irregular period or bad cramps willingly elect hysterectomies so they won’t miss work. As she also explains, “their willingness to undergo the procedure stems from the fear of cancer (which doctors convince them of) to the belief that their uteruses are of no use once they have had children.”

According to Srivastava, hysterectomies are a “moneymaking racket” in India for private hospitals. When illiterate rural women with menstrual cramps and heavy bleeding go to clinics, the doctors don’t give them options.  They don’t even let them consult their families, and they are not told the cause of their problems or informed about the procedure.  They often don’t know if their ovaries have been removed as well as their uterus.  The operation is expensive, and many rural clients’ insurance does not cover the operation.  Families need to go to moneylenders to get the funds for the operation.  In Maharashtra, the average cost of a hysterectomy is $598 and the average daily wage for a female worker is $2.98.

According to Indian Media, over a three-year period, more than 4,500 young women had premature hysterectomies in the Beed district alone. And the numbers are going up.  A 2018 government survey found that 22,000 women between 18 and 49 had hysterectomies. In one study that interviewed 200 women, 69% were unsure or uninformed of the nature of whether their procedure had removed their whole uterus or just their ovaries.

Education about menstruation and personal hygiene is the key lever to reducing period taboo and premature hysterectomies in India. Education will enable more women to exert their rights in many other areas as well such as choosing contraceptives and making their own informed health decisions.  Photographer Niraj Gera, writes, “It is time we realize that menstruation is just a biological process and the secrecy surrounding it must go. It is important to normalize menstruation and destroy taboos around this natural process” As a strong advocate for period education he concludes, “Talking is all it takes to begin a transformation and it’s time we did it.”