This new plastic is lightweight, stronger than bone, completely recyclable and self-healing.

While working in the lab, Garcia discovered that a solution in a flask hardened. After many attempts to break it and once her stirring bar got stuck, she found that it was both incredibly strong and stable.

After her accidental discovery, Garcia worked with IBM’s computational chemistry team to replicate the discovery and learn more about the plastic.

The new thermosetting polymer, called polyhexahydrotriazine (PHT,) is formed from a reaction of paraformaldehyde and 4,4-oxydianiline (ODA,) which are both used in current polymer production. This means that the production of PHT could be easily achieved through a simple adaptation of current processes.

Thermosetting plastic is used for a variety of purposes including automobiles and aircraft due to its resilient but lightweight qualities. The polymers are usually mixed with carbon fibers to form composites.

Dr. James Hedrick, in charge of research at IBM, is excited by the prospective directions the plastic could take.

For the large and expensive aircraft materials alone, the ability to recycle and reuse would save a great deal of money and reduce waste.

“We’re at the discovery phase,” Hedrick said. “There are many new applications for the plastic with potential industries such as aerospace, transportation, electronics, cosmetics and architecture/construction. Almost every industry has the potential to be impacted by this discovery.”

“Every time you discover a new polymer-forming reaction, it leads to all sorts of new materials,” he said. “Applications are running like water.”

While adapting the process, the researchers also discovered flexible, self-healing gels that could be used for the production of drug capsules in particular, due to its solubility properties.

Although this new discovery does not directly affect poverty, the simple reduction of plastic waste would greatly help the environment and the economy and, in turn, poverty. The contamination of the oceans and sea life from plastic can begin to be reduced. Numerous industries would benefit economically and create more jobs, which would help reduce poverty around the world. 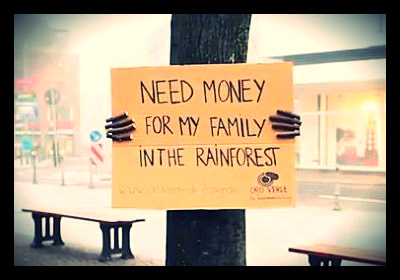 On May 28, 2014, the United States Agency for International Development (USAID) announced their financial support for the Althelia Climate Fund.

The Althelia Climate Fund is an organization that works to curb deforestation and unsustainable land use because they believe that “natural capital—our ecosystems, biodiversity and natural resources—is fundamental to the well-being and sustainable development of our societies.”

USAID has agreed to lend $133.8 million to the Althelia Climate Fund that will provide commercial loans to thousands of forest-based businesses whose livelihoods depend on the sustainable management of land use. This large sum is the first private sector fund of this scale allocated to forest conservation.

Deforestation and forest degradation accounts for nearly one fifth of all global greenhouse gas emissions and has an immense impact on all of the world’s citizens.

“Over 1.5 billion people rely on forests to meet their day-to-day needs, and the majority of these are poor rural communities, including some 60 million indigenous people,” USAID Administrator Rajiv Shah stated. “By creating incentives to better manage these forests, we provide a pathway out of extreme poverty for families who depend on forests while helping preserve critical ecosystems.”

The deterioration of ecosystems hurts everyone, in both developing and developed countries. Althelia estimates that the “annual value of services provided by nature is in the trillions of dollars.”

The financial support from USAID will make it possible to give commercial loans to ecotourism and agroforestry businesses that will enable them to expand their operations. The funds will also protect 20 rainforests and help reduce an estimate of 100 million tons of carbon dioxide from entering the atmosphere, or the equivalent of taking 18.5 million cars off the road for one full year.

USAID’s Development Credit Authority (DCA) works to mobilize financing locally in developing countries. Through the DCA, credit guarantees reduce risk for private lenders and provide incentive for them to include underserved borrowers in new sectors and regions.

DCA covers up to 50 percent of the risk in lending toward programs that work to achieve USAID’s development objectives. The USAID guarantees cumulative default rate is only 1.85 percent, which means entrepreneurs and businesses in developing countries are being funded at little cost and risk to U.S. taxpayers. Already $3.1 billion dollars has been mobilized to finance private local finds.

As businesses around the world increase their profits, not only is the standard of living increased, but an added bonus is the expansion of the world’s middle class. This expansion in turn results in an increase of U.S exports, of which already 45 percent go to developing countries.

In a video message to the Carbon Expo in Germany from Washington DC on May 28, 2014 when USAID announced its financial support, Secretary of State John Kerry stated that, “If we act now, we can not only save our forests, we can create jobs and economic growth, we can clean up our air, we can improve our health, we can create greater security… and we can live up to a fundamental responsibility that we all share: leaving future generations with a planet that is clean, healthy and sustainable.”

A port owned by a mining company in northeast Brazil is helping the local economy but polluting the region.

The Ponta da Madeira terminal was established in 1986 by Vale for the shipment of iron ore while simultaneously guaranteeing job stability for young people in Itaqui-Bacanga, an impoverished location in Brazil.

“Company trains arrive at the port, transporting minerals from Carajas, a huge mining province in the eastern Amazon region that has made vale the world leader in iron ore production,” said Global Issues. “The port also exports a large proportion of the soya grown in the centre-north of Brazil.”

However, George Pereira, the secretary of the Itaqui-Bacanga Community Association (ACIB), said Vale and other companies located around the area brought the wrong type of development into the region.

“We have more money in our pockets but no water to drink, because the rivers are polluted,” said Pereira. He believes that sanitation and education developments are more important for the community.

According to the article, ACIB was ironically created by Vale a decade ago to clean up the Itaqui-Bacanga area. However, Vale’s own creation is being awfully easy on the corporation.

On the other hand, Friends of the Earth International (FoEI) calls Vale the worst corporation in the world today.

The organization claims that the mining company is also among the largest producers of raw materials and has reported a profit of $17 billion in 2010.

But a FoEI study also found that Vale failed to help keep the environment clean.

Moreover, FoEI also said that Vale has representatives both in the Brazilian government and the UN delegation who work hard to promote policies that “undermine global action on the climate crisis”.

Although Vale was able to create jobs for the impoverished in Itaqui-Bacanga, the company is actually causing more damage to the earth in the long run.

A common misconception is that protecting the environment exacerbates poverty in poor nations because it prevents agricultural development and the ability to harvest natural resources. This is far from the truth. In fact, environmental protection initiatives actually help alleviate poverty.

A study done in Costa Rica reveals that ecotourism efforts contribute to decreased poverty levels in regions situated near protected parks and natural areas. Thanks to the economic opportunities provided by the ecotourism sector, these regions have seen nearly 66% reduction in poverty. Paul Ferraro, professor of economics and environmental policy at Georgia State University, finds three triggering factors that show a direct correlation between poverty reduction and environmental conservation.

A similar study was done by the Proceedings of the National Academy of Sciences (PNAS) on protected areas of Thailand and Costa Rica established 15 years ago. The study concluded, “the net impact of ecosystem protection was to alleviate poverty.” Communities around protected areas in Costa Rica experienced a 10% decrease in poverty, while the communities in Thailand saw almost a 30% reduction. As in the previous study, PNAS finds that tourism revenue and job opportunities directly contributed to reduced levels in poverty.

Protecting biodiversity is critical for 75% of the world’s poor who live in rural areas and depend on sustenance farming and fishing for survival. Disappearing or declining species in an ecosystem directly impacts people’s ability to provide food for their families. Local villagers in the Sierra Leone region of West Africa, for example, experienced direct effects of biodiversity loss as a result of overfishing and pollution. As fishing makes up their main source of food, the coastal community struggled to sustain their protein-rich diet with the loss of diversity in fish stocks. The World Bank helped restore the marine ecosystem by improving fishing regulations and introducing sustainable fishing techniques in the area.

The World Bank invests over $1 billion in nature and wildlife protection, and an additional $300 million in environmental and natural resource law enforcement. Moreover, investments in biodiversity help create jobs and raise incomes around the world. The Bank has already helped boost income levels in communities within rural regions of South Africa, Kenya and Honduras. The long-term impacts of these investments contribute simultaneously to two of the eight U.N. Millennium Development Goals:

The protection of natural ecosystems from environmental degradation, such as pollution, deforestation and biodiversity loss, ensures the safety and stability of local impoverished communities that rely on those precious natural resources for survival. Environmental protection has proven to be a key factor in poverty reduction around the world, and it is critical that international organizations, like the World Bank, continue to support global initiatives in hopes of making the UN Millennium Development Goals a reality.