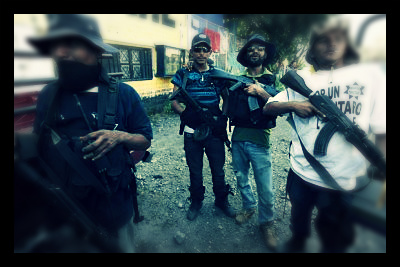 The compilation of troops has discouraged the vigilante groups in the Mexican state of Michoacan from fighting the Knight Templar drug cartel on their own. President Enrique Pena Nieto’s goal has been to avoid the domestic disaster that would take place if the separate groups were to collide.

Recently, the risk of social violence has been at an all-time high, considerably in the agricultural region known as Tierra Caliente. In the last month, shots were fired at the office of the federal prosecutor, injuring a 25-year-old window washer.

The residents of Michoacan interpreted the shooting as a violent protest conducted on the behalf of the allies of the Knights Templar. The city where these acts are taking place, Apatzingan, is an important base of operations.

A recent case of arson against a pharmacy in Apatzingan reaffirmed some residents suspicions that the federal government is either “unwilling or unable to stamp out the Knights Templar.” This group has been known for using terrorism and extortion to control majority of the commerce in Michoacan. The cartel has successfully infiltrated numerous local governments.

Due to the lack of action or protection on the behalf of troops who are present in Apatzingan, the residents have instilled their faith in the self-defense groups. These groups have been “staffing roadblocks alongside federal police on the outskirts of town.”

According to a statement released by the federal government, police or military personnel have been assigned to every municipality in the southern portion of the state. Officials also said the arrests of Joaquin Negrete and Jorge Fabian Quezada, two alleged cartel leaders, were made. 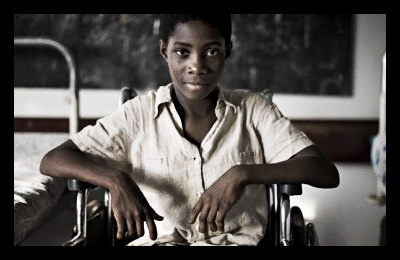 Bijoko Atangana, the secretary general of Cameroon’s Medical Council, called attention to the immense number of doctors working illegally in the country. The government explained that 600 illegal hospitals and health centers have recently been identified, those of which who are not abiding by government specifications are also being closed down. Atangana further described how easy it is to pinpoint doctors with fake licenses since they are not working under the National Medical Council.

Moreover, the World Health Organization (WHO) presented information on the use of counterfeit drugs used within illegal hospitals, drugs which are suspected of leading to over 200,000 deaths worldwide each year. Cases involving blood transfusion infections, counterfeit malaria, antibiotics and tuberculosis drugs have left patients either severely ill or dead, especially in Cameroon. The lack of medical staff due to the crackdown on hospitals is also proving to be an issue as patients wait hours with nobody to help them.

Cameroon’s Health Ministry is working hard to close down illegal hospitals and enforce laws to save lives. The WHO has also been actively working for decades to stop counterfeit drug networks. They have, since 2009, closed down several retail outlets, 100 of which were in China. They have also been involved in aiding countries create detection systems and develop high-tech drug packaging to avoid easy drug replication. Developing countries such as Cameroon are easy targets for illegal pharmaceuticals and clinics due to the cheap price of medications while the necessity of medical practitioners are in high demand. 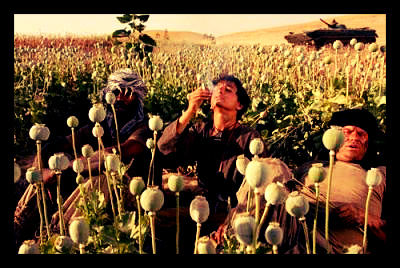 Part of the U.S. war in Afghanistan has been centered on eradicating opium production and distribution in the war torn nation. Billions of dollars have been invested by the U.S. to achieve this end.

Unfortunately, the U.S. has objectively failed on all counts to realize this goal. Just this past year, Afghan opium was produced at record levels despite a hefty U.S. investment of $7 billion dollars.

Currently, the opium trade composes 15 percent of the Afghan economy. Its heroin production, derived from opium, accounts for over 75 percent of the entire world’s supply.

The prospects of significantly reducing poppy cultivation in Afghanistan seem slim at best due to its embedded nature within the culture as well as the extreme poverty most Afghans live in. The lucrative prices opium sells for can provide a decent living for Afghan families struggling to get by.

For example, just one kilogram of opium can sell for up to $200. This is significantly more money compared to the paltry 41 cents per kilogram one gets for selling wheat.

NPR profiled one farmer who makes $9,000 per year by producing 150 lbs of opium. No other opportunity in Afghanistan provides a comparable income.

Previous measures implemented by the Afghan government have been aimed at providing disincentives for farmers who desire to enter the drug trade. But, resources have become scarce in recent years, forcing the programs to be shuttered.

In one such program, the Afghan government subsidized alternative crops such as cotton. The subsidies inflated the price, making the move away from poppies more palatable for Afghan farmers.

The international community also attempted to provide disincentives by shipping seeds and fertilizer to farmers, but the program in no longer being implemented. Absent these programs, farmers simply return to the lucrative poppy trade.

One of the most disturbing consequences from the ubiquity of opium in the country is the presence of addicts in staggering numbers. Out of the total population of 35 million people, one million are currently addicted.

The treatment capacity to provide for these addicts is extremely limited. The government only has the ability to treat 20,000 people at any one time. Availability for treatment is limited depending on one’s location in the country.

Also, the ease at which one can obtain drugs in Afghanistan only adds to the problem. For instance, in Kabul, the price for heroin only amounts to $6 and to many is as easy to obtain as food.

The major security implications for the sale of these drugs lie with who directly benefits from the profits, namely the Taliban forces. The UK Daily Mail reports that in 2011 the Taliban is estimated to have earned up to $700 million dollars from the sale of opium and heroin.

The strategic importance of eliminating the opium trade in Afghanistan was typified by a comment made by former U.S. special envoy to Afghanistan, David Holbrooke. Holbrooke stated, “Breaking the narco-state in Afghanistan is essential, or all else will fail.”

With the inevitable troop draw down coupled with the uncertain status of a residual counterterrorism force to stay behind post-2014 — the possibility of making major headways toward eradicating the Afghan drug trade is nonexistent.

Nonprofit organization Urban Ministries of Durham partners with advertising agency McKinney in order to create “Names for Change,” a venture that allows the renaming rights to household products.

The concept is simple: the items available at the shelter are open to be rebranded with the proceeds going towards providing homes for the homeless. The prices range depending on the product, and can vary from a jar of peanut butter to a refrigerator.

The renaming can be for oneself or can be offered as a gift for someone else. Afterwards, there is a choice to create an official poster of the given product.

From there, a serial number and certificate of authenticity is branded on the product, further immortalizing the newly named item and the step towards helping a recipient out of homelessness.

To date, the campaign has raised $41,065, enough to raise eight individuals out of homelessness.

Jenny Nicholson, the brainchild behind the naming campaign, is associative creative director at McKinney, a company part of the larger mother communications corporation Cheil Worldwide.

Hailing from University of North Carolina at Chapel Hill’s social work master’s program, Nicholson teamed up with Urban Ministries, a homeless shelter, to start up an online game that engages the issues of homelessness.

The online game “Spent” allows players to offer a donation post-game and proposes over 169 new items to having its respective naming rights changed.

Executive director Patrice Nelson mentions the collaboration with Urban Ministries wherein the non-profit serves over 600 meals per day in its community café as well as offering community shelter, a clothing closet and food pantry.

With winter snowstorm Hercules settling in the northeast and key communities declaring Code Blue, the Durham community itself is rallying its homeless to available shelters. Durham Rescue Mission notes that alcoholism and drug addiction keep these individuals away from the shelters

The hope behind “Names for Change” is to create a permanent household that will eventually render shelters as a solution to the problem.