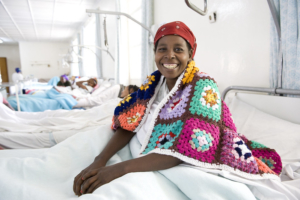 African doulas have been gaining popularity in a variety of ways in recent years. Doula Wambui Wanguhu Wanjau, a native Kenyan, trained as a nurse in Sweden and became a traveling nurse in Australia. While she was there, she met doulas: trained professionals who provide emotional, physical and informational support. Doulas play a role throughout a woman’s pregnancy, labor, delivery and postpartum period. When Wanguhu Wanjau returned to Kenya and personally experienced a difficult pregnancy and delivery, she realized that Kenya needed doulas. Doula Wambui then pursued training from Doulas of North America International (DONA), the world’s leading doula training and certification organization. Doula Wambui began her doula practice slowly. Initially, Kenyan women did not understand a doula’s role and why they had to pay someone to labor with them. As women began to realize the benefits of having a pregnancy, childbirth and postpartum coach, Doula Wambui’s practice grew steadily.

Doulas have slowly been gaining popularity in low- and middle-income countries (LMIC) in Africa during the last decade. Among them are Kenya, Uganda, Senegal and South Africa.

In 2016, the World Health Organization (WHO) developed a Safe Childbirth Checklist. This checklist includes having the presence of a doula at births. WHO asserted that the globe could avoid many of the 303,000 maternal deaths, 2.6 million stillbirths and 2.7 million newborn deaths that occur annually with the support of doulas.

WHO reported that mothers who have a childbirth attendant (family member, friend or doula) in the room during labor need fewer pain medications and have more vaginal births and fewer cesarean, vacuum or forceps births which have more complications. Doulas recognize danger signs in the labor process or in the newborn and alert medical staff. Newborns whose moms have doulas have stronger Apgar scores and bond better with their moms.

Doula Wambui believes that when a doula is present, patients are more likely to avoid a cesarean section. She noted that women with doulas have shorter births. According to Wambui, doulas help them relax so that their bodies can produce oxytocin which is necessary to progress labor.

African Doulas in Uganda and Senegal

Laura Wando, a doula in Kampala, Uganda, shared in a 2016 Daily Monitor article that during the first prenatal visit she discusses birth experience expectations and preferences. She guides the family on what to look for on a hospital tour. On the second visit, she uses a checklist to discuss birth planning. This includes discussion on the various stages of labor, medication and labor positions. During the third prenatal visit, she reviews comfort choices. Doula Wando is on-call two weeks before the due date and visits the family about four days after the birth.

While most African doulas are female, a new movement in Senegal is introducing male doulas to guide men during their partners’ pregnancies. Traditionally, Senegalese pregnancy and childcare are strictly female responsibilities; men do not accompany their partners as birthing partners. The Senegalese version of a doula, a “Bajenu Gox,” or “Godmother” in Wolof, guides women into motherhood. According to a 2021 Euronews story, a group of Bajenu Gox realized that men would benefit from doulas of their own and promoted the idea of male doulas. Now 54 male doulas called “Nijaayu Gox,” or “Godfathers” in the Dakar area go door-to-door talking to men about ways to involve themselves in their partners’ pregnancies and guide them into fatherhood.

The COVID-19 Pandemic and African Doulas

The COVID-19 pandemic has altered the doula role by restricting the number of people allowed in the labor room. Because most African doulas receive the “non-essential” classification, they have had to perform their duties virtually. A 2021 Frontiers in Sociology research report shared the experiences of a South African doula whose client had to choose between her partner and her doula as the one non-essential person accompanying them. Because the doula’s role is different than that of the partner, she implied that the lack of her presence led to an unnecessary cesarean birth.

The researchers shared that as 2020 continued, most doulas adapted to the restrictions and used technology. Many doulas have attended births virtually during the pandemic. One South African doula had her client wear earphones during labor so she could hear her encouragement and guidance. The report explained that doulas themselves disagree about wanting others to consider them essential and allowing them in the labor room. The report concludes, “Now more than ever we need to recognize and support the essential work that doulas do, as well as invest in strategies that increase access to doula care for women worldwide in sustainable ways.”

When the pandemic is over, Doula Wambui plans to seek funding to train community doulas in Kenya. She hopes that more pregnant women will receive emotional, physical and informational support during their pregnancy, childbirth and the postpartum period.