Archive for category: COVID-19 in Myanmar 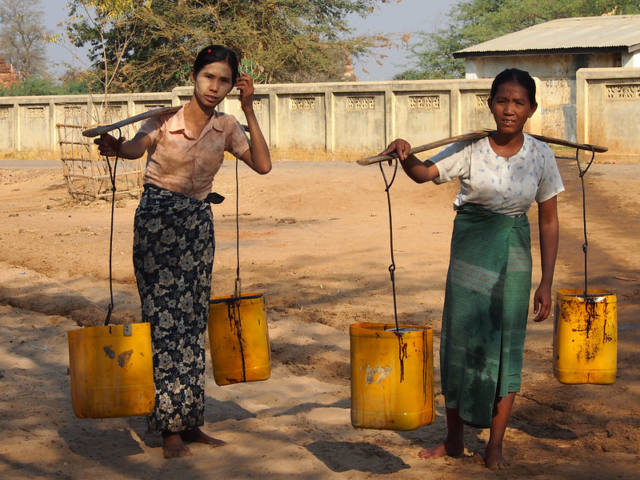 In 2017, Myanmar’s poverty rate was approximately 24.8%. By December 2020, the second wave of COVID-19 was estimated to bring the poverty rate to almost 50%. COVID-19’s impact on poverty in Myanmar has been devastating but aid aims to remedy the situation.

A Breakdown of COVID-19 in Myanmar

Myanmar’s first confirmed COVID-19 case was in late March 2020. In the weeks leading up to the first positive case, Myanmar’s government outlined its plan for curbing the virus’s spread. On April 6, 2020, Myanmar’s government initiated lockdowns and ordered schools and businesses to commence remote operations.

Recently, COVID-19 cases in Myanmar have been increasing again. Many world doctors and health officials question the validity of the reported numbers since the military seized power on February 1, 2021. The military imprisoned doctors who opposed it and COVID-19 testing slowed as a result. COVID-19 case numbers in Myanmar are potentially higher than officially reported.

In early June 2021, Myanmar reached a recorded 144,000+ COVID-19 cases and upwards of 3,000 deaths. Myanmar’s economy halted and COVID-19’s impact on poverty in Myanmar, requiring the government and the people to strategize in order to encourage economic flow.

Economically, Myanmar’s government endeavored to stimulate halted areas of the economy. Service sectors and tourism contributed significantly less to the Myanmar economy. However, information and technology services expanded and the agricultural areas of Myanmar stayed stable.

To improve the Myanmar economy, the government drafted a plan costing $2 billion. The government received its funding from international partners. The funding goes toward stimulus packages, investments in infrastructure and improving public services such as healthcare.

The progress Myanmar has made over the past decade in decreasing its poverty rate halted and even reversed. COVID-19’s impact on poverty in Myanmar demanded that its government make significant investments that will benefit many workforces, but tourism, for example, cannot improve without open borders. Tourism became an intriguing industry for work in Myanmar in 1995. It now represents 3% of the employment force but displayed signs of expansion until the COVID-19 pandemic hit. The year 2015 was a peak year for tourism in Myanmar. An estimated 2.5 million tourists spent 773 million kyats or $469,000. Until 2019, tourism accounted for 55% of the gross domestic product (GDP). The tourism industry hopes for an employment boom when Myanmar’s borders fully reopen.

AstraZeneca is the only vaccine in Myanmar. The first shipments to Myanmar arrived in January 2021. As of June 2021, Myanmar has distributed three million vaccines. Fears of the AstraZeneca vaccine and its side effects spread after reports of blood clotting post-injection. Britain halted usage of the vaccine until further research could solidify its effectiveness but Myanmar did not.

Myanmar’s vaccination progress had two major distribution advancements between March and May 2021. Myanmar prioritized vaccinating healthcare workers. The distribution then expanded to include more categories of workers. It could take six months before another 10% of the population will have both vaccinations. Currently, only 3.1% of Myanmar’s population is at full vaccination status. Help from international allies will be necessary to make notable progress in vaccination distribution. The U.S. has a large supply of vaccines from all its distributors and intends to distribute vaccines internationally. Myanmar is working to raise funds to obtain more vaccines.

For several decades, Myanmar’s poverty rate garnered the attention of many non-government organizations hoping to help. One such organization is World Vision International (WVI),  an organization based in England that typically works directly to support children. Recently, it dedicated the majority of its efforts to feeding and helping children affected by the COVID-19 pandemic in Myanmar.

In Myanmar, the organization works with local businesses to offer food and shelter to children. During the pandemic, WVI expanded its efforts to ensure child poverty levels do not rise even further. WVI has worked in Myanmar for decades. The organization recognized COVID-19’s impact on poverty in Myanmar and advocates on behalf of the people to the Myanmar government. WVI secured masks, gloves, sanitizer and cleaning stations throughout Myanmar.

WVI maintained money flow as much as it could in areas that lack of work devastated. It also delivered food to hard-to-reach areas of Myanmar. Other organizations followed WVI’s example when COVID-19’s impact on poverty in Myanmar peaked and negatively affected life for many in the country. With the combined efforts, the poverty level, which rose in 2020, stabilized. It is an arduous road to recovery for Myanmar. Myanmar should be able to reduce the impact of the virus on its poverty levels with assistance from allies and committed organizations.