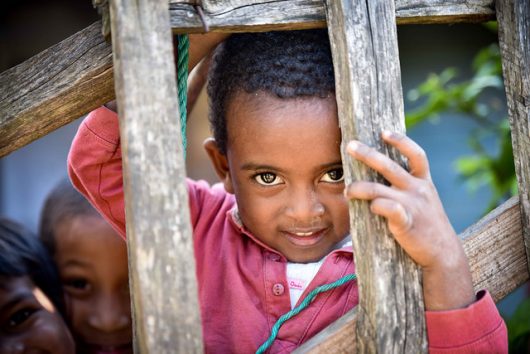 It’s no secret that Americans love to go out to eat. Choosing take out or driving to the nearest food drive always sounds better than working in the kitchen for what seems like hours. Luckily, for those times that a good burger or pizza sounds too delicious to pass up, there are still opportunities to help the world’s poor as restaurants adopt new policies of corporate social responsibility.

Restaurants everywhere are catching on to the notion that they can adopt a policy of corporate social responsibility and use their position in society to help people who are in need. According to an article in AdWeek, Millennials are civic-minded and have more recently demanded that companies and corporations be civic-minded as well by giving back to society. Millennials want to create change, take responsibility for the world and help those who are unable to help themselves.

Many people know of clothing brands and large corporations that are donating sums of money or have a one-for-one philanthropic model with clothes, shelter and other essential items. In a similar way, there are now many restaurants that are donating food to hungry people all over the world.

Some major brands, including Panera Bread, Chipotle Mexican Grill, Yum Brand restaurants and Zambrero donate to charitable causes specific to eradicating hunger worldwide. Some restaurants name the charities they are working with right in their mission statement. For example, Malawi’s Pizza serves “pizza with a purpose,” has a Meal for Meal Exchange program and has sent 923,859 meals to orphans in Malawi since its inception.

These are only a few options. The good news is there are many more corporations that care about good causes. Staying educated on corporate social responsibility is the most efficient way to be up-to-date with which corporations are making a difference because those are the ones that should maintain support. The more demanding consumers are of socially responsible corporations, the more they will appear and, as a result, Americans can begin taking more responsibility for those in need everywhere. 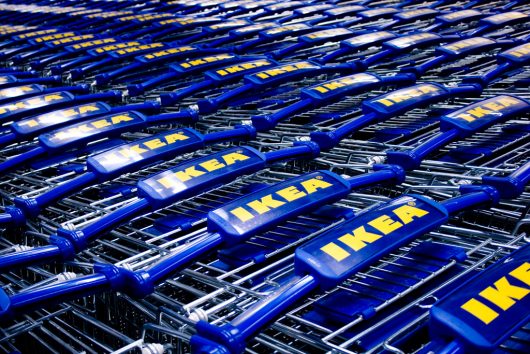 A new e-permit system in Serbia, created with the help of USAID, has shortened the process for obtaining a construction permit from 240 to 28 days. It cut out the 50-plus interactions between the investor and the government. One can register for an e-permit through the Business Register’s Agency website, the Minister of Construction website, or other government websites.

The new e-permit system will help develop Serbia’s important infrastructure as well, particularly transportation. Serbia has been called the “gateway to Europe” as it is the crossroads between Western Europe and the Middle East. The Serbian parliament is looking for private investment in this sector, and the e-permits system has made this process more efficient. In addition, the new e-permit system is allowing the Clinical Center of Serbia to build new healthcare facilities. New jobs in the construction sector lead to new jobs in other sectors. The new e-permit system has not only helped construction in Serbia, it has increased the nation’s GDP by 3.5% in the first quarter of 2016.

One company already taking advantage of the new system is IKEA, and its investment is expected to bring 700 million euros and 300 new jobs to the nation. IKEA took advantage of the new permit process to build a new store in Belgrade. This new store is expected to open in July 2017. IKEA will be the first international business to invest in Serbia after the introduction of the country’s new construction e-permit system. The store in Belgrade is only the first store IKEA is building in Serbia, and the company is planning to invest 300 million euros in five stores across the nation.

IKEA will hopefully pave the way for more investment in Serbia, whether through creating new businesses or encouraging domestic construction in Serbia.

In December 2015, Silicon Valley Community Foundation (SVCF) awarded $50 million in matching grants to support 24,450 nonprofit organizations in the United States and 45 other countries, according to CSRwire.

This is the largest total to date, beating out last year’s total of $23 million in matching grants. SVCF gives matching grants through its partnership with YourCause, which is the leading Software as a Service provider of employee engagement resolutions.

YourCause provides companies with a variety of employee engagement techniques including volunteering and charitable giving.

Maeve Miccio, Vice President of Corporate Responsibility for SVCF, said, “SVCF is proud to say that we sent more than $50 million in matching grants to nonprofit organizations around the world in 2015. We applaud our corporate clients and their employees who have made philanthropy a priority through employee engagement programs in their workplaces. Their gifts support everything from education to the arts to hunger relief programs, and their generosity is inspiring.”

Matching grants come from corporate funds, matching the amount of money donated to a charity by an employee of that company.

According to CSRwire, nearly one-fifth of the total matching grants SVCF awarded by December 2015 came from PepsiCo employees and matching grants from the PepsiCo Foundation.

“PepsiCo believes in investing in our people and in the communities where we operate,” according to Andrea Seek, Director of Global Citizenship for PepsiCo. “It is gratifying that our partnership with SVCF and YourCause has allowed us to help improve and strengthen our communities around the globe.”

Around 65 percent of Fortune 500 companies have programs to match employees’ donations with corporate donations, according to CSRwire.

Approximately $2.1 billion was donated by the U.S. in 2014 by companies around the world through matching corporate gift programs.

SVCF is the largest community foundation in the world and continues to work toward innovative philanthropic solutions to challenging problems. 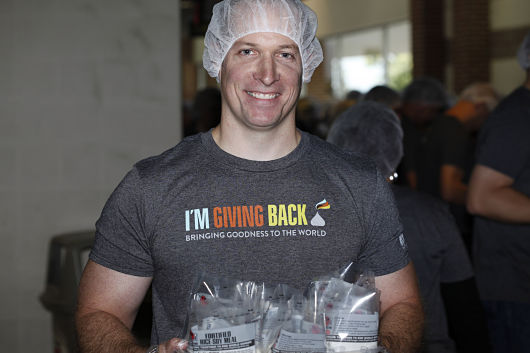 The Hershey Company does more than produce delicious sweets. The company shares goodness with malnourished people all around the world in order to help end world hunger. To do this, their mission consists of a balance between having good business, fostering a better life for others and creating a bright future for those in need.

The company is dedicated to its mission. In the last three years, they increased cocoa farm yields around the world by 45 percent and improved cocoa farming knowledge in Ghana. In addition, Hershey has started Project Peanut Butter, which helps save the lives of starving children in Ghana. The company has also raised over 4 million dollars for Children’s Miracle Network, which helps treat sick and injured children.

The candy company constantly continues to touch the lives of others.

Stop Hunger Now is an organization that aids people who face starvation and disaster.

Todd Camp, director of Hershey’s Corporate Social Responsibility and Community Relations said, “We are excited to partner with Stop Hunger Now and have such an impact on the hungry around the world.”

More than 700 Hershey employees gathered and packaged 255,744 meals put together by Stop Hunger Now. The packaged meals contain rice, soy, vegetables and 23 essential minerals and vitamins. They will be sent to Stop Hunger Now partner organizations in Haiti, El Salvador, Liberia and Burundi.

“It’s not just about that we make candy, it’s not about the stockholders, it’s that we’re helping children every solitary day. To know we get to keep giving back… it’s a great feeling,” said Hershey volunteer, Denise Price.

Hershey packaged 15,000 more meals this summer than last summer. With the commitment shown by the Hershey volunteers, next summer’s event is sure to be promising. Like many others, The Hershey Company hopes to contribute to the end of world hunger. 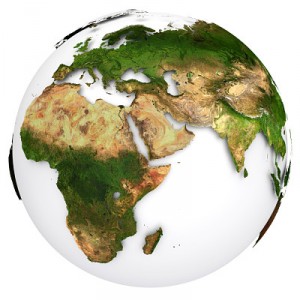 In Africa, there are many foreign corporations investing in and fueling industry, many of which are part of extractive industries that may not be economically beneficial for the continent in the long run. A company that stands apart from this ilk is Unilever.

Unilever is a British-Dutch multinational consumer goods corporation whose products reach 2 billion consumers in over 190 countries, making it one of the world’s top 500 largest corporations. Unilever has been in Africa for over a century and produces annual sales there of more than $5 billion, employing 40,000 people on the continent in offices and building factories in 40 locations.

This megalithic corporation has built an impressive reputation for itself. FORTUNE Magazine consistently recognizes Unilever among the World’s Most Admired Consumer Food Product Companies and in 2013 recognized Unilever as a Top 50 World’s Most Admired Company. Much of this admiration stems from the numerous gender diversity and environmental sustainability awards Unilever has garnered over the years.

Despite these accolades, criticisms are aplenty and certain truths are unavoidable. For example, Unilever’s biggest purchases are palm oil, soya, paper and beef. These are commodities whose global trade is responsible for 50 percent of global tropical deforestation, admitted Gavin Nearth, senior vice president of sustainability at Unilever.

Significantly, these criticisms are not necessarily thrown in a dark corner at Unilever with the hope that they will wither and die. There is an acknowledgement that the vast corporation’s practices have enormous environmental and social impacts that have not been, and still are not in many instances, sustainable.

Yet things do seem to be changing. In 2009, Paul Polman, previously an executive at Nestle and before, Proctor & Gamble, became Chief Operating Officer of Unilever. Within a year he introduced the Unilever Sustainable Living Plan, a series of goals that aim to transform the company by doubling its size while increasing its positive social impact and reducing its environmental footprint by 50 percent. Despite the worry of many stockholders, according to Financial Times, Mr. Polman believes that these goals are necessary to maintain a “license to operate” in an age of public scrutiny.

Increasing social impact includes increasing workplace rights, ensuring that women get a fair deal and improving health and well-being for more than 1 billion people. Reduction of Unilever’s environmental footprint entails ensuring that their products and supply chain meet environmental requirements covering everything from forest protection to pest control. The impact of working toward these goals will manifest in Unilever’s sizable African operation.

Furthermore, Unilever’s business model in Africa impacts the African poor. According to Frank Braeken, Unilever Executive Vice President for Africa, “There is a growing realization that the future of Africa is based around a consumer rather than mining. This is a consumer that has been under-served and over-charged.” For Mr. Braekan, there are hundreds of millions of untouched consumers, most of whom are low-income, known as bottom of the pyramid (BOP), consumers.

A method through which Unilever reaches BOP consumers is low unit packs (LUPs). These are small consumer goods, worth as little as half a cent. Small shop owners buy goods from Unilever companies in large packs and resell them in smaller portions.

LUPs is just one method by which Unilever plans to meet Africa’s poor and their needs. In conjunction with its vast operations on the continent and increasingly sustainable business model, Unilever will be able to be quite the developing force in Africa.

Sources: BDlive, Financial Times, How We Made It in Africa, Telegraph, Unilever
Photo: Telegraph