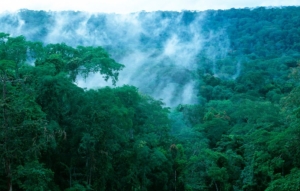 Recently, the government of the Democratic Republic of Congo (DRC) decided to auction 30 oil and gas drilling blocks in the Congo Basin forest, including areas that venture into the Virunga National Park. This decision comes just eight months after the government signed a $500 million deal to protect the basin, resulting in protests from local inhabitants and international communities. The President claims that the Congo’s oil auction is necessary for alleviating the DRC’s extreme poverty, but activists argue that the environmental impact of drilling far outweighs the benefits.

How Drilling is Harmful

Environmental experts warn that drilling will have severe environmental repercussions. Firstly, the Congo Basin forest includes the Cuvette Centrale Peatlands, the largest tropical peatland in the world that stores the equivalent of 15 years worth of carbon emissions from the United States.  If Congo’s oil auction proceeds, huge amounts of carbon will be released and could become the “tipping point” for the world’s climate.  Furthermore, the Virunga National Park is a UNESCO heritage site that is one of the most biologically diverse areas in Africa, home to the last mountain gorillas on earth.  Experts have actually dubbed the Congo basin as “the worst place in the world to explore for fossil fuels.”

Drivers to Break the Deal

Eight months ago, the DRC signed a 10-year deal to protect its forests in exchange for $500 million in international pledges. However, since Russia’s invasion of Ukraine and the subsequent boycotts, oil prices have skyrocketed. It follows that those high prices bring even more value to the Congo’s oil blocks. That’s why eight months later, the government breached the deal. And that is why Irene Wabiwa Betoko, overseer of the Congo Basin forest for Greenpeace Africa insists that the DRC is “declaring war against our planet with oil and gas.”

Although stopping Congo’s oil auction has clear benefits for the world at large, critics have also picked up on the hypocrisy of the West on this issue. The New York Times comments that many politicians from African countries have called out Western countries for their double standard: “How can Western countries, which built their prosperity on fossil fuels that emit poisonous, planet-warming fumes, demand that Africa forgo their reserves of coal, oil and gas in order to protect everyone else?”

According to the World Bank, the DRC is in the top five most impoverished nations in the world. In 2018, around 73% of the population lived below the poverty line. Didier Budimbu, the hydrocarbons minister of the DRC, claims that breaking the deal was necessary to generate revenue for the people. “The president, Felix Tshisekedi, has a vision and he wants to get his population out of poverty,” Budimbu said. He further claims that although it currently only produces 25,000 barrels a day, the Congo has the potential to produce up to a million barrels of oil daily. Production at that level could generate more than half of the Congo’s GDP.

But Where Does the Money Go?

Despite promises of poverty relief, there is no guarantee that the money resulting from the Congo’s oil auction will go to the people. The majority of the DRC’s income already comes from mining. According to Reuters, the Congo produces large amounts of copper, diamonds, gold and cobalt, yet the nation remains impoverished due to corruption and political ineptitude. That parallel situation raises questions about how much the oil drills will actually do for the economy.

Tosi Mpanu Mpanu, the DRC’s representative on climate issues, claims that the drilling could be done diagonally to avoid disturbing the peat. He further claims that all drilling will abide by global commitments to the climate. Mpanu promises to complete thorough reviews to measure the drilling’s impacts on the environment and local communities. Other land could be set aside to offset the land that will be used for drilling, he argues.  Finally, Mpanu suggests that by allowing the mining of minerals such as cobalt and lithium used to develop green energy, the DRC has “paid its climate change dues.”

There are also indications that participation in the oil auction may be waning. Ève Bazaiba, the DRC’s minister of environment, has expressed a willingness to forego the auction if international support provides an alternative source of revenue. The French oil giant TotalEnergies has also expressed that it does not intend to bid in Congo’s auction.

So, as the auction proceeds, there may be ways to simultaneously lessen the negative environmental impact and fight the Congo’s high poverty.  At any rate, the DRC oil auction underlines the complexity of protecting the land and the people living on it.