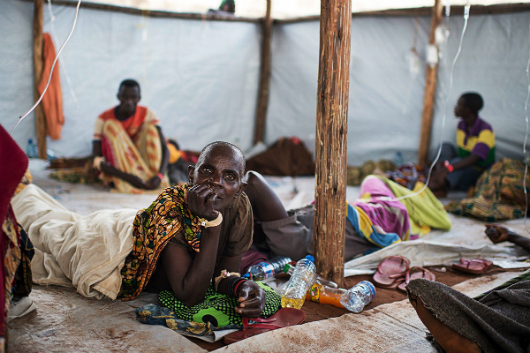 A cholera outbreak in Tanzania that claimed the lives of 30 Burundian refugees and local Tanzanians has been curbed.

The epidemic occurred in western Tanzania near Lake Tanganyika, in a remote village that is overcrowded with refugees. Authorities estimate refugees consumed contaminated lake water, which facilitated the spread of cholera. A total of 4,408 cases have been reported.

A UN Refugee Agency (UNHCR) spokesman, Adrian Edwards, said that no new deaths have been reported since last Thursday, and the number of new daily cases has fallen from around 915 per day at the height of the outbreak on May 18 to less than one hundred per day. According to Edwards, the situation is improving but it still could take several weeks to see cholera completely eradicated among this population.

The majority of the cholera victims are refugees of Burundi who are fleeing to avoid violence stemming from a failed political coup in Burundi’s capital, Bujumbura.

The refugees that arrive in Tanzania must walk four hours through the mountains to reach the border. Some immediately are bussed to the camp called Nyarugusu, and some wait for boats that will take them to a camp called Kigoma. Tens of thousands wait by Lake Tanganyika, a tiny beach area that is only 800 meters by 500 meters. The overcrowding and high density of refugees on the move has facilitated the quick spread of cholera.

Many refugees are being moved from Lake Tanganyika because it is overcrowded and unsanitary. Kahindo Maina, a public health officer of the UNHCR, said, ”Our priority is to get all the refugees out of Kagunga because the situation is dire. We have built latrines and brought supplies to provide clean water but the terrain and the crowded situation does not allow for a good sanitary situation there.”

Refugees have been moved to the Tanganyika stadium in Kigoma where there are better facilities, and cleaner water and sanitation. Tanzanian health authorities, the UNHCR, the World Health Organization and other partners have helped stem the spread of cholera by the promotion of hygiene, treatment of patients, implementation of effective prevention measures and the creation of access to sanitation and safe water.

Other preventative measures provided by the Ministry of Health, the UN and NGO partners include airlifting medicine and providing medical supplies and protective gear. UNHCR spokesman Edwards explained that “together with the government and our UN and NGO partners, we are providing oral rehydration solutions, soap and water purification tablets, and increasing hand-washing facilities.”

Around 30,000 refugees have also been moved from the lake area to Nyarugusu. Here, they receive vaccinations for childhood illnesses, get dewormed and have nutritional assessments done. New latrine and sanitation facilities are being built.