Nigeria has recently overtaken South Africa as the largest economy on its continent. In spite of its upward trajectory Nigeria still has much further to go. Boko Haram, an Islamist militant organization, has for years terrorized Nigerians by attacking officials, civilians and public institutions. Since 2009 Boko Haram has killed more than ten thousand people and displaced 1.5 million.

The organization was founded by Mohammed Yusef in 2002 in Maiduguri, in the northeastern state of Borno, to transform Nigeria into an Islamic state ruled through sharia law. Back then however, its goals did not include violent insurgency. Rather the group sought to galvanize Nigeria’s northern Muslim population against the alleged corruption in the southern government and to challenge the regional economic disparities between the Christian South and Muslim north.

When Boko Haram protested a motorbike helmet law in 2009 they became targets of armed police brutality which then sparked revolts in many of the Northern provinces. This led to military suppression of the protests, which killed 800 and led to the capture and eventual extrajudicial killing of Yusef and other sect leaders. From there, the violence began and the grouped splintered under its fragmented leadership.

Today, the elusive Abubaker Shekau leads Boko Haram’s insurgency against the Nigerian government in Borno. Shekau holds almost superhuman status; allegedly killed at least three times by the Nigerian military, videos of the enigmatic leader still continue to surface. According to The Council on Foreign Relations, “Nigerian officials and many experts are convinced that Shekau has become a brand adopted by leaders of different factions of Boko Haram, and that the men in the videos are actually look-alikes.”
Last year Shekau’s organization claimed responsibility for the kidnappings of 200 girls from a public secondary school in Chibok, Borno State, in north east Nigeria. Smaller attacks on other schools and universities preceded this tragedy and highlight one of Boko Haram’s most common targets: education. The name ‘Boko Haram’ roughly translates to ‘Western Education is Forbidden.’

Through strong arm tactics, Boko Haram has made education in northeastern Nigeria all but impossible. In the wake of the kidnappings, most secondary schools in Borno have closed. This move is particularly advantageous for Boko Haram. Closing schools leaves boys more vulnerable to its recruitment methods and perpetuates poverty. Likewise, out of school girls are more likely to be married as teens. In total, 10 million children out of a population of 160 million are not attending school. This figure represents the largest number of out of school children in the world.

With nearly a third of the population between the ages of 10 and 24, a stronger spending in education could radically improve life in Nigeria. However, with schools closing throughout the country, the Nigeria must also focus on rooting out Boko Haram and providing better security for its students. If done in tandem, Nigeria will experience the undeniable benefits of an widespread effective education system. 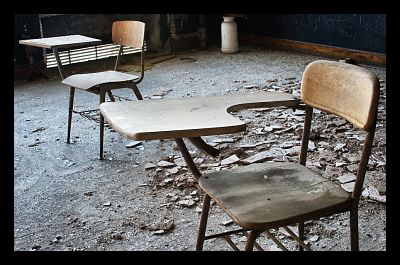 On November 10th, in the Northeastern Nigerian town of Potiskum, a suicide bomber killed around 46 students ranging from 10 to 20 years of age during a school assembly. The bomber was wearing a school uniform and entered the boys’ school in Yobe state unnoticed. Yobe’s state governor has shut down all public schools in the region and requested urgent action be taken by the Nigerian government.The suicide bomber was among the dead,  another 79 were severely wounded.

Police have suggested the terrorist organization Boko Haram is responsible for the attack. The militants have continuously targeted schools “during a deadly five-year insurgency” with the aim of establishing an Islamic state. Boko Haram, whose name translates to “Western education is sin”, believes that girls should not be able to go to school and boys should only receive an Islamic education.

The group has conducted a series of attacks and kidnappings, the most recent at the Government Science Secondary School. Boko Haram’s attack against the non-Quranic school was one of the worst attacks to date.

In Potiskum alone, Boko Haram has attacked roughly 10 schools, while another 5 schools in the surrounding parts of Yobe state have been targeted. However, the militant group rarely claims responsibility for individual attacks. Despite the large number of bombings against schools, there is still a huge lack of security for students.

The Nigerian military has not been deployed to safeguard school grounds in the North and the only protection at the Government Science Secondary School included a few local guards armed with sticks.

Citizens have been requested to report suspicious activities to security agencies. In addition, and in order to identify people with ill intent, people who rent property are asked to thoroughly check renters so criminals cannot hide in their midst.

Government officials have indicated to local communities that security is a collective responsibility, and that peace can only be achieved through collaboration with all interested parties.