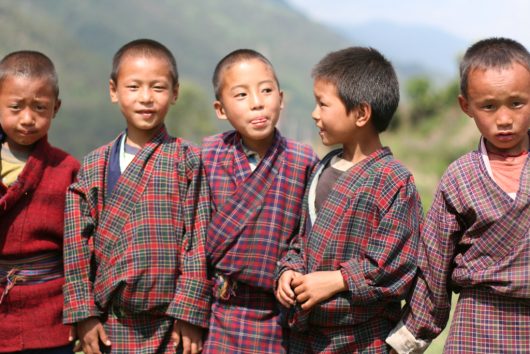 Bhutan, a small agricultural country in the eastern Himalayas between India and China, has come a long way in its war on poverty as the country has halved its poverty rates — from 23.4 percent to 12.04 percent in five years.

The launching of a five-year program in 1961 and the establishment of a national airline in 1983 spurred economic development, ensured equitability and environmental sustainability for the country; however, research on the health and nutritional status of Bhutanese children is lacking.

A substantial amount of work needs to be done to target malnutrition and hunger in Bhutan, especially among young and school-aged children.

UNICEF Regional Goodwill Ambassador and Bollywood actor Aamir Khan notes, “While Bhutan has made amazing progress in areas of health and nutrition, there’s still work to be done and every child is yet to be reached.”

Moreover, according to a report by BMC Pediatrics, 47.7 percent of young children at the age of six to 59 months are stunted, 34.9 percent of preschool children are facing malnutrition and 10.4 percent are underweight.

These rates of stunting require significant attention in Bhutan’s efforts in alleviating poverty, as malnutrition at an early age can lead to many functional consequences including poor cognition and educational performance, low adult wages and loss of productivity. These consequences also affect and slow down the development of the nation’s economic infrastructure in the future.

As a member of the U.N., Bhutan has agreed to the Sustainable Development Goals in which Goal Two strives to “end hunger, achieve food security and improved nutrition and promote sustainable agriculture.” By 2030, there are hopes that there will be zero malnutrition and hunger in Bhutan.

Moreover, the World Food Program (WFP) is working to combat child malnutrition by encouraging school enrollment and attendance through a development project called “Improving Rural Children’s Access to Basic Education with a Focus on Primary Education.”

WFP Bhutan encourages teaching various methods to students to break the inter-generational cycle of malnutrition. This is accomplished by training teachers at the College of Natural Resources (CNR) for agriculture and nutrition coupled with the School Agriculture Program (SAP).

Piet Vochten, the head of WFP in Bhutan explained, “We want to educate every child on agriculture and nutrition so that they are able to grow into healthy adults who will have healthy and well-nourished children to break the inter-generational cycle of hunger and poverty.”

Although Bhutan has made drastic improvements in its poverty rates over the last few decades, malnutrition and hunger in Bhutan must be addressed in order to secure the progression and growth of the economy.