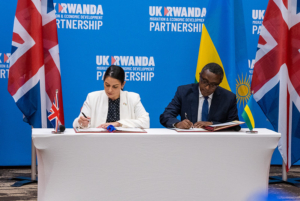 On April 14, 2022, the U.K. government and Rwanda entered into an agreement, that later became a five-year asylum partnership agreement. The agreement, officially titled “U.K.-Rwanda Migration and Economic Development Partnership,” will aim to provide asylum for immigrants traveling to the U.K. illegally, through relocation to Rwanda. As part of the agreement with Rwanda, officials will process refugees on entry into Rwanda, where they will receive a decision regarding their refugee status.

What Does the Agreement Entail?

U.K. Home Secretary Priti Patel and Rwanda’s Minister of Foreign Affairs, Vincent Biruta signed the asylum partnership agreement, which falls under the Memorandum of Understanding. The decision to strike an agreement with Rwanda came about as a result of the U.K.’s new immigration policy, which intends to counteract illegal immigration. “The consultation showed public support for the need to disrupt the criminal activity that underpins illegal migration.”

Rwanda will receive financial support from the U.K. government to accommodate and process refugees. According to the House of Commons Library “…the U.K. is providing £120 million funding to Rwanda. It will also pay for the processing and integration costs for each relocated person.”

Is the Agreement Necessary?

The two states signed the agreement in response to the migrant crisis affecting much of Europe in recent times. They intend to provide a safer, more manageable system to combat illegal immigration into the U.K.

It is anticipated that approximately 60,000 people are set to travel across the English Channel by the end of 2022. This figure is more than double in comparison with last year’s 28,526 people crossing the Channel in small boats. There was hope that schemes such as the partnership agreement would present a more viable option to combat future illegal immigration. However, “14,728 people have arrived since the government launched the Rwanda policy,” according to BBC.

Many raised notable questions over the suitability and practicality of Rwanda serving as the representative country to accommodate refugees. Significant concern from U.K. officials regarding the asylum partnership agreement with Rwanda has manifested from numerous documents submitted to a high court hearing earlier this year.

A key point raised questions over Rwanda’s human rights status. Rwanda is one of the 14 countries presenting substantial issues in relation to asylum systems and human rights.

Concerns regarding the impact the agreement may have upon refugees traveling to Rwanda and the communities that they could settle in have been a prevalent talking point. Treatment of refugees arriving in Rwanda remains an issue from a human rights perspective, as suppression of freedom of speech, detention and even torture are common practices.

Economically, Rwanda has seen steady progress in recent times, with the country aiming to become a middle-income nation by 2035. However, according to The World Bank, with its poverty percentage standing at 55% in 2017, it may represent a difficult beginning for many refugees. The refugees that could face relocation to Rwanda will indeed discover this and with the right to leave Rwanda available to thousands of them, it has the potential to cause chaos and increase the strain on aid agencies working to combat poverty within Rwanda and across Africa.

The Ethical and Legal Challenges of the Agreement

At this current time, the agreement appears to be shrouded in controversy and indifference due to human rights concerns. The inaugural flight carrying asylum seekers destined for Rwanda should have departed on June 14, 2022. However, the European Court of Human Rights'(ECHR) late intervention successfully halted the first wave of deportations. Prime minister Boris Johnson condemned the ECHR’s decision and threatened to revoke the U.K.’s participation in the convention.

The asylum partnership agreement with Rwanda was met with a considerable outcry in the lead-up to June 14 and efforts to disrupt and put an end to the agreement were voiced in the form of organized protests. The UNHCR commented on the agreement, stating “They should not be traded like commodities and transferred abroad for processing.”