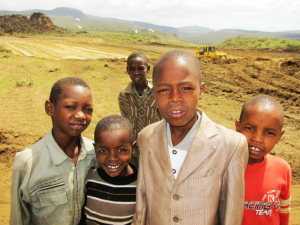 The continent of Africa makes enough food to feed its entire population. However, there are still plenty of citizens who go to bed hungry and live in poverty. Due to the general struggle of exporting goods, Africa can barely get its products out to other countries, much less within the region, because goods cost much more than they normally would. However, there are organizations, such as USAID and legislation such as the African Free Continental Trade Agreement (AfCFTA) that are working on reducing trade tariffs and increasing trade within Africa.

Africa’s infrastructure was designed to send out goods and other resources to other areas in the world, not for trading within the region. This dilemma has created many roadblocks to trading across borders. One of these is that the price of trading outside the continent has risen dramatically. Specifically, “the cost of goods in the region is nearly 40% above retail because it costs that much to get it to consumers,” according to USAID.

Food insecurity is one of the most significant impediments to economic prosperity in Africa and the result of a lack of increasing trade within Africa. More than 27 million people in the region are still food insecure and require assistance, amounting to a 39% increase since 2016.

However, USAID is working with the government in Africa and private sector organizations on reducing the costs of doing business, and increasing trade within Africa. USAID Trade and Investment Hubs are working to improve the opportunities for investment. “For every $1 of public money spent, the hubs leverage $9 in private sector investment.”

There are other solutions too. Under the African Growth and Opportunity Act, which reduced both the cost of importing/exporting goods by half, Africa has begun back-and-forth trade with the U.S. Over 10 years later, “U.S. businesses have exported $37 billion worth of goods to East Africa,” USAID reported.

Another effort toward increasing trade in Africa is the African Continental Free Trade Agreement Area Agreement, (AfCFTA), “a landmark trade agreement,” signed in 2018.

The AfCFTA, An Overview

The AfCTFA pressures countries to remove tariffs on 90% of goods and will create a market that has, “over a billion consumers” and a total GDP of more than $3 trillion, according to a Brookings report. This would make Africa “the largest free trade area in the world.”

Thanks to the fact that the AfCFTA has been increasing trade within Africa, the number of goods trading within the region has increased from around 10% in 1995 to about 17%. However, as stated before, the region’s total trade with itself still remains low compared to other global superpowers such as Europe, Asia and North America.

However, according to the Economic Commission for Africa (ECA), the AfCFTA will increase the number of agricultural products traded within the country by 20 to 30%. By accepting the agreement, state revenue, income for farmers, and investments in modern agricultural practices will increase. ECA wrote a report on the AfCFTA and explained that “the AfCFTA potentially embodies a ‘win-win’ approach such that all countries across Africa and vulnerable communities within these countries receive benefits from the agreement,” according to a Brookings report.

A United Nations Conference on Trade and Development (UNCTAD) report in 2021 showed that Africa’s, “untapped export potential amounts to $21.9 billion, equivalent to 43% of intra-African exports.”

Due to COVID-19, the date of free trade in Africa pushed back to January 1, 2021. Just a month before free trade was supposed to begin, an African coffee and cocoa merchant named Meron Dagnew visited the AfCFTA Secretariat in February 2020. “I am hoping to not pay as much as 35% tariffs on my goods… I could then make a profit, expand my business and hire more people,” she said.

The lack of modern transportation systems holds back traders like Dagnew to ship their goods. According to Africa Renewal, “African countries could rake in $20 billion yearly by simply tackling non-tariff barriers that slow the movement of goods.”

There are plenty of blockades to increasing trade within Africa, such as tariffs, food insecurity and a lack of modern agricultural practices. However, thanks to the help of organizations such as USAID, and legislation such as the African Free Continental Trade Agreement, Africa is slowly making their way towards being able to provide for each and every citizen and promote growth within the region’s hard-working traders.