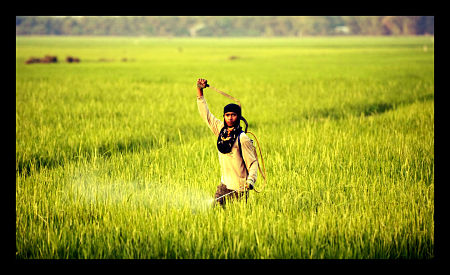 Absolute poverty in Cambodia fell from 53 percent to 20.5 percent in seven years, far exceeding the Millennium Development poverty target. The initial development goals aimed to halve poverty in developing countries by 2015. Cambodia surpassed these expectations in 2011.

However, concerns over the sustainability of this economic upturn plague Cambodia and the world of development.

To address these concerns, experts first study the factors driving this rapid growth. In the Phnom Penh Post, Ulrich Zachau highlights the reasons being “increased rice prices and increased rice production.” Coupled together, these shifts in agriculture raised the salaries of farmers and the wages of their workers. In total, the increases in cost and production accounted for nearly half the poverty reduction.

A number of improvements in the environment allowed for this increase in rice production. As technology advances, more farmers communicate and access information on the agriculture market. Improvements in basic infrastructure also helped the market. Moreover, increased access to roads allows farmers to transport products to the market. On the farms, improved irrigation led to greater quality and quantity of rice.

Zachau voices the growing concerns of Cambodians: “While they are benefiting from the country’s rapid economic growth, Cambodians say they are hoping for a more prosperous future which isn’t based on cheap labor.”

In 2004, five out of 10 Cambodians lived in poverty, but by 2011, this number fell to two. When these shifts in agriculture lifted millions from poverty, where did they land?

Not far, the World Bank reports.

In 2011, nearly 8.1 million of those living on the edge of the poverty line were classified as “near-poor.” In contrast, 4.6 million lived on less than $2.30 per day in 2004. Living on the fringes of prosperity, these men and women face the constant threat of poverty.

As a high-risk population, the “near-poor” remain vulnerable to “the slightest income shock.” A loss of 30 cents per day could risk forcing three million Cambodians to return to poverty thereby doubling the current poverty rate.

The World Bank offers the following recommendations to support the “near-poor” and those in poverty:

This early success of the Millennium Development target requires Cambodia to combat poverty on two fronts: protecting the “near-poor” from an economic shock and lifting the remaining 20 percent from poverty.

The increase in rice production offered rapid relief. Yet to enact long-lasting change, development must address the underlying social and economic forces shaping the lives of Cambodians.