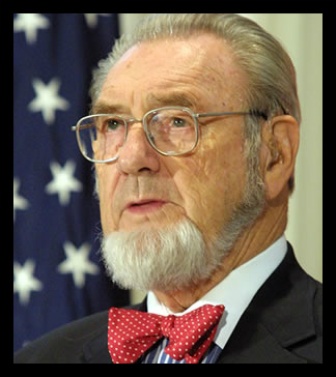 C. Everett Koop, the former Surgeon General of the United States, died yesterday at the age of 96. He is perhaps the most recognizable figure to hold that position because of his impact in raising awareness about the then-emerging disease of AIDS. He served under Presidents Ronald Reagan and George H. Bush for seven years, while the AIDS/HIV epidemic became a national and international epidemic.

Concerned with healthcare all over the world, he wrote the influential book “Critical Issues In Global Health”, in 2002. It became required reading for anyone wanting to understand the complex needs of providing adequate healthcare in the 21st century, and beyond. He put together experts and professionals from around the world, from different backgrounds, to compile a comprehensive look at the challenges and tools needed for improving people’s health.

Gro Harlem Brundtland, Director-General of the WHO, wrote the first chapter entitled “The Future of the World’s Health.” He states that “our first priority must be to decrease and eliminate the debilitating excess burden of disease among the poor.” Getting people out of poverty is what will lead to the greatest improvements, a critical component being the creation and distribution of low-cost/or free medications.

In the forward by Jimmy Carter, he says, “the miracles of science could and should be shared equally in the world,” emphasizing rising inequality and its role in the prevalence of the disease.

Though C. Everett Koop had no legal authority to set government policy, Koop described himself as “the health conscience of the country. My only influence is through moral suasion.” He improved the health of millions worldwide.