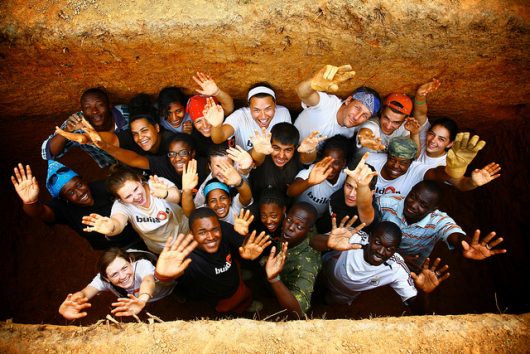 The buildOn organization has been building schools globally and domestically for more than twenty years, but the construction of schools is not the only focus. The organization builds and develops the abilities of every member of the community in which the schools are placed.

In 1989, Jim Ziolkowski, a recent college graduate and the future founder and CEO of the buildOn organization, took a trip around the world by way of hitchhiking and backpacking. During his travels, he came across a village in Nepal that had recently built a school, and he noticed a dramatic difference between this community and others that he had visited in his travels. This Nepalese village had a unique brightness about it that was centered around education.

Upon returning to the United States he was unable to remove the comparison of what he had seen from his mind. After a short time, he quit his job and began to develop ways in which he could give the gift of education to those who would not be able to obtain it otherwise. In 1992, the first school was built in Malawi, and since then, hundreds of schools have been built in some of the most impoverished locations across the world.

The buildOn website notes, “Our holistic approach ensures that schools are built with a community rather than for a community. It involves villagers as true partners rather than as recipients of aid.” The program claims that this nature of approach incentivizes the residents, and shows them what can be accomplished when they work together in a common cause.

When a community is under consideration for a new school, each member is required to give his or her consensus in writing—or in fingerprint—that he or she will fulfill respective obligations to render local supplies, assist in construction and maintain the school upon completion. It has been observed that “Even as many must sign with a thumbprint, everyone is overjoyed to pledge their commitment to a school that will end illiteracy for their children, their grandchildren, and themselves.”

As mentioned, young children are not the only ones who benefit from the placement of these schools. At night, in the same schools where their children are educated by day, parents and grandparents are given the opportunity to engage in adult literacy classes. These classes address the issues of healthcare, poverty, and inequality, in addition to the fundamental teachings of reading, writing, and math. This is all gauged to help the people build a better life for themselves and their children.

Unfortunately, in many countries, women do not hold the same status as men. For this reason, buildOn places a centralized focus on gender equality. In the written covenant, there is an included agreement that boys and girls alike will be allowed to attend school in equal numbers. From the beginning to the end of each project, women are highlighted as key members of the community. The right to education is for everyone.

Though the construction of schools is the physical product of buildOn’s effort, it is not the ultimate focus. When asked as to what his favorite aspect of working for buildOn is, Badenoch answered by saying simply, “The people. Unlocking opportunity for people who are very capable and intelligent. The key players aren’t our staff, rather the people in the community play the major role.”