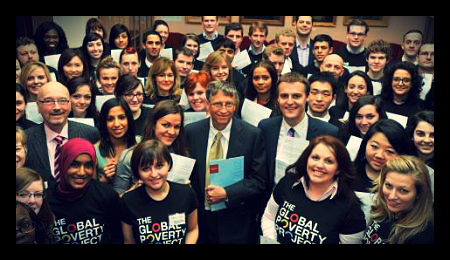 The World Economic Forum is held every year for top leaders, thinkers and businessmen around the world to meet in Davos, Switzerland. The topics and discussions are over a range of ideas, but they all focus on making and shaping the world into a better place for everyone and achieving  poverty’s end. Bill Gates has been a regular attendee at these meeting and his newsletter that was released by the Bill and Melinda Gates Foundation lays out the three myths about poverty that do more harm than good.

The first myth is that poor countries are doomed to stay poor. Gates cited China as a prime example of this. He cites the transformation places like Mexico City have undergone from 1980 to 2011 as an example of how poor countries have the ability to truly transform themselves. Bill Gates goes on to note that seven of the 10 fastest growing economies of the past half-decade have been in Africa.

Gates go on to say optimistically that by 2035  he believes that there will not be any country that is consider “poor” by the current World Bank standards. He see countries either being in the “lower-middle income or rich” category, he sees poverty’s End.

Bill Gates’ second myth is that foreign aid is a big waste. He cites the eradication of polio as an example of aid working. Today, there are only three countries that have never been polio-free: Afghanistan, Pakistan, and Nigeria. There is now a global effort to eradicate the disease completely by 2018, which will not only save the lives of scores of people, but also save about $2 billion dollars per year in preventative treatments.

Bill Gates’ third myth is that saving and prolonging life leads to overpopulation. He cites Thailand in the 1960’s as an example. Child mortality rates began to decrease, then in the 1970’s the government invested in a strong family planning program. Now Thailand’s child mortality rate is as low as the United States and Thai women are only having about two kids each.

Gates’ foundation does amazing things every year, and by issuing this information to the public he is helping to educate and make sure that people and governments have their facts straight.