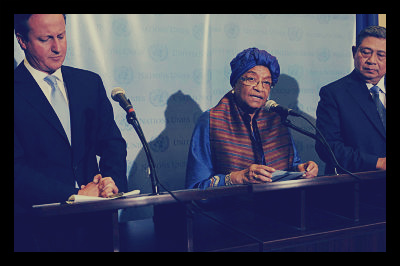 The U.N.’s High-Level Panel on the Post 2015 Development Agenda met last week in Liberia to discuss the continuing goal of diminishing global poverty. The panel, which is co-chaired by British Prime Minister David Cameron, includes 27 world leaders and is responsible for generating ideas to challenge poverty after the 2015 deadline for the Millennium Development Goals (MDGs).  A series of three meetings are scheduled, and the panel is set to reconvene in May 2013.

The panel will create goals to combat poverty beyond 2015, and will do so by hearing from local communities, charities, corporations, and experts in international development to formulate their priorities for fighting global poverty in the future. The panel is also encouraging comments and suggestions from individuals, and has set up two avenues for citizens to express their opinions and ideas – My World, a survey of global issues, and World We Want 2015.

Although the panel has three general areas of interest – environmental sustainability, social equity, and economic improvement – the primary focus is specifically on Africa. Liberia’s President Ellen Johnson Sirleaf, also co-chair to the panel, stated, “Through robust consultations, we are hearing what the world considers a reasoned, practical development agenda that can successfully eliminate the myriad dimensions of poverty by 2015 and beyond.”