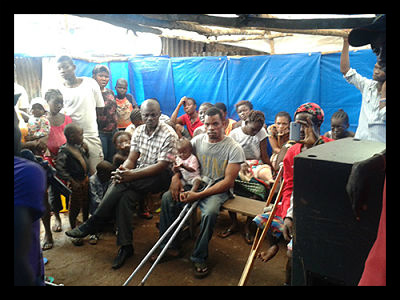 As of 2011, there are an estimated 450,000 disabled persons living in Sierra Leone. This number includes the blind, the Deaf, people living with polio, individuals who are war wounded and amputees.

The Sierra Leone Civil War of the 1990s left 1,600 amputees alone. As of yet, the Sierra Leone government has not offered any assistance to these members of society.

With 8,973 probable, confirmed and suspected cases of Ebola and a recorded 4,484 deaths across Sierra Leone, Guinea and Liberia, the outbreak of Ebola has put these individuals at high risk of infection.  Those who are blind and Deaf and often use their sense of touch to navigate and communicate, consequently increasing their chances of infection.

Handicap International’s health coordinator, Adam Huebner said “It was inconceivable that Ebola would use up so much energy and so many available resources. All of our teams in Liberia and Sierra Leone are now focusing their efforts on controlling this virus.”

Sierra Leone and Liberia officials, as well as the CDC are both trying to control the spread of Ebola. However, volunteer health workers who are combating the outbreak through awareness and other preventative measures have been met with violence.

The paranoia of the epidemic has translated into a discrimination not just against Ebola victims but also the disabled. Kamara is a woman living on one of the Polio compounds in Makeni. She has been isolated from the outbreak physically and economically. She used to make necklaces with others on the compound to generate income.

Kamara says, “I sell them [necklaces] at the price of 20,000 but since the Ebola crisis, I don’t have customers. People marginalize us because of our disability.” Because of this most disabled are left clueless to the dangers of Ebola.

Organizations like UNDP and Handicap International have begun to reach out to disabled persons offering information and counseling about the epidemic ravaging their countries. Huebner says, “At our own level, we’re trying to open up discussions with local people so that they can ask about anything that might be worrying them and get information about what can be done to limit the number of new cases. We’re also addressing questions related to the indirect consequences of the virus.”

The UNDP has been delivering information directly to the front doors’ of quarantined individuals. In addition, UNDP officials have been handing out pamphlets in braille and informative picture brochures for those that can’t read.

These face to face encounters with UNDP officials and the members of Handicap International have afforded those in the dark to ask questions. Information is power, especially during a crisis. These groups are bringing a sense of peace to people living with disabilities. They are empowering a group of people, who very much want to be a part of the process, with their own voices.