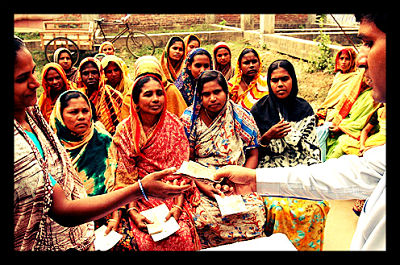 In short, Asirvad Microfinance is an organization that aims to provide services to poor women in India. According to Bloomberg Businessweek, it offers an income generation program, through “micro enterprise, housing and festival loans.” According to CNN Money, Microfinance groups are nonprofit, and help “fill the gap” when entrepreneurs can’t get loans. They lend money, but usually smaller amounts under $35,000, to companies with just a few employees. CNN Money said their guidelines for lending are “much more flexible than traditional banks.”

Asirvad lends between 50,000 and 100,000 Indian rupees to people doing business or improving current business. This amounts to about US$812 to US$1,628. These loans do have stipulations. For instance, a rural household income cannot exceed 60,000 rupees a year, and urban or “semi-urban” households cannot exceed 120,000 rupees a year. The borrower also cannot be more than 50,000 rupees in debt already.

The company was founded in 2007, and is based in Chennai, India, though it has branches in eight other cities in India. Another of Asirvad’s goals is to “empower at least one million families by 2013 by providing financial assistance.” Asirvad is managed by a team of seven people.

They define their values by way of an acronym:

Asirvad is trying to lend a minimum of one billion rupees to the women of urban and rural India by 2015. They intend to “organize groups of committed poor women” and hope to provide financial services “in a sustainable manner” with an eye trained on eradicating poverty “through viable income generation activities.”