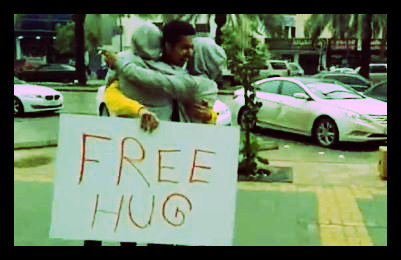 What better way to promote love and compassion than by offering hugs? Ten seconds of hugging a day is said to lower your blood pressure and help release the stress-reducing hormone oxytocin. No deaths have ever been reported as a result of a hug, and what most would think to be a relatively benign act has landed two men behind bars.

The Free Hugs campaign started in 2004 by an unknown Australian man known only by his pseudonym “Juan Mann.” His goal was simple – to reach out and hug a stranger, and brighten up their lives. “Mann” was motivated by the idea that everyone has problems, but to see someone who was once frowning, smile, is worth it every time.

Inspired by this, a young Saudi man, Bandr al-Swed, posted a video of himself offering hugs to male strangers on YouTube.

“I liked the idea and thought it could bring happiness to Saudi Arabia” Swed told al-Arabiya news. This then inspired two more young Saudis, Abdulrahman al-Khayyal and a friend.

The boys offered free hugs in one of Riyadh’s, the capital and largest city of Saudi Arabia, main shopping streets. They were then arrested and detained by the kingdom’s religious police. The Commission for the Promotion of Virtue and Prevention of Vice is charged with maintaining sharia law.

Sharia law is the law of Islam. It is cast from the Quran and abides from the actions and words of Muhammad, the Prophet. It is the national law of Saudi Arabia and follows policy that includes denying the Quran, Allah, or Muhammad punishable by death.

The two were required to pledge that they would not offer hugs again. And were arrested for violating local laws and engaging what the police called “exotic practices.”

Despite this, al-Khayyal told The Independent that he would continue giving out free hugs. “I consider it an act of charity,” he said, and that he is proud of what he has done.

Controversy surrounds the religious police. After a 2002 school shooting resulting in the death of 15 girls, the police were accused for trying to keep the girls inside the building because they were not wearing the proper black robes required by all Saudi females.