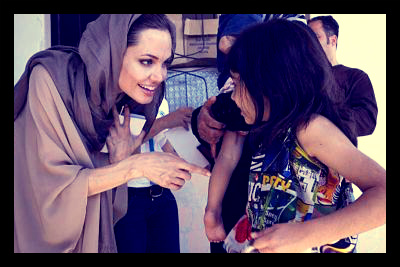 The Jean Hersholt Humanitarian Award was created for the Danish actor, who worked tirelessly in many philanthropic capacities in the 1930’s and 1940’s. Notably, he served as President of the Motion Picture Relief Fund.

Jolie was appointed Goodwill Ambassador for the UNHCR in 2001, and has worked extensively with the refugees, forcibly displaced, and victims of sexual abuse and violence. In 2012, UNHCR Chief Antonio Guterres named Jolie UNHCR Special Envoy. From there, Jolie took on more responsibility, becoming an advocate focusing on emergencies with complicated implications, such as the Syria Crisis.

At the Governor’s Awards, Jolie was both humbled and grateful for the award. Guterres commended her for her dedication and direct support she has provided for countless individuals. He pointed out Jolie’s visiting more than 40 nations in crisis. He said, “Angelina works tirelessly for refugees. I have seen how much they inspire her as she listens to them for hours on end. Together, we have focused our efforts on very complex refugee situations, most recently the Syria crisis.”

Jolie responded emotionally, and compassionately referred to those she had supported, “I have never understood why people are lucky enough to be born with the chances I had and why across the world there is a woman just like me with the same abilities, same desires, same work ethics and love for her family who would most likely make better films and better speeches, only she sits in a refugee camp and she has no voice. She worries about what her children will eat, how to keep them safe and if they will ever be allowed to return home. “I don’t know why this is my life and not hers, but I will do as my mother asked me to do, the best as I can and be of use to others.”

In an effort to widen her advocacy efforts, Jolie founded the National Center for Refugee and Immigrant Children, which she funds. She also co-created Kids in Need of Defense, Jolie Legal Fellows Program, Education Partnership for Children in Conflict, and the Maddox Jolie-Pitt Foundation.

Let Jolie be the kind of role model for future generations. She has utilized her celebrity to save lives, and make the world a better place. She is a go-getter on so many levels, and cares about the people of the world, and works hard to ensure their basic human rights.

Malaria: The EnemyUN Economic and Social Council
Scroll to top