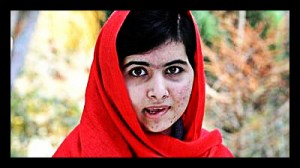 On October 9, 2012, while traveling home on a school bus, a masked gunman targeted Malala Yousafzai and shot her in the head and neck, critically injuring her and wounding two of classmates.

At the age of 12, Yousafzai became an activist for education equality and women’s rights after writing a blog pseudonymously for the BBC that painted the picture of her life, and the lives of many other women and girls living in Pakistan’s Swat District, under extremist Taliban rule.

The moving BBC diary about Malala Yousafzai entitled, Diary of a Pakistani Schoolgirl, surfaced in 2009 after an edict, the Sharia law, banned girls in the Swat District from attending school. To enforce the edict, schools were bombed and families phased out of Swat, fleeing to other cities where their daughters could attend school without objection or threat to their lives.

Following the online publication of Diary of a Pakistani Schoolgirl, the New York Times produced a documentary called, Class Dismissed: Malala’s Story, which gained worldwide attention and brought Yousafzai notoriety for her bravery and stance against education inequality.

Now 16, Malala remarkably recovered from the attempted assassination with no cognitive damage after being treated in a rehabilitation center in the UK. It has been reported that Yousafzai was attacked for her attempt to promote a “smear campaign” against the Taliban. In a letter sent to Malala, the Taliban noted that they “never attacked [her] because of going to school…the Taliban believe[d] that [she was] intentionally writing against them and running a smearing campaign to malign their efforts to establish Islamic system[s] in Swat.”

They also found her guilty of “provocative writings.”

Despite the Taliban’s efforts to frighten Malala into coming back to Pakistan, the young activist courageously continues her fight for education reform and women’s rights in Pakistan, by way of Britain, where she currently lives.

Malala received the coveted International Children’s Peace Prize and gave a speech at the United Nations in July which earned her a nomination for the 2013 Nobel Peace Prize, making her the youngest person ever to be considered for the award.

In a world where 57 million children don’t have access to education, 32 million of those children being girls, Malala Yousafzai is a role-model to all as she fosters awareness about the ongoing global issue of gender-based inequality and prejudice in education.

Because of The Malala Fund and the efforts of the Millennium Development Goals, the number of children with lack of access to primary education has declined by almost half—from 102 million to 57 million. However, considerable efforts are still underway to ensure that all children to have access to education, one day.

Coal Cycle Wallahs: A Last Resort for India’s Impoverished  Frontline SMS Can Save Mothers and Babies Via Texting
Scroll to top