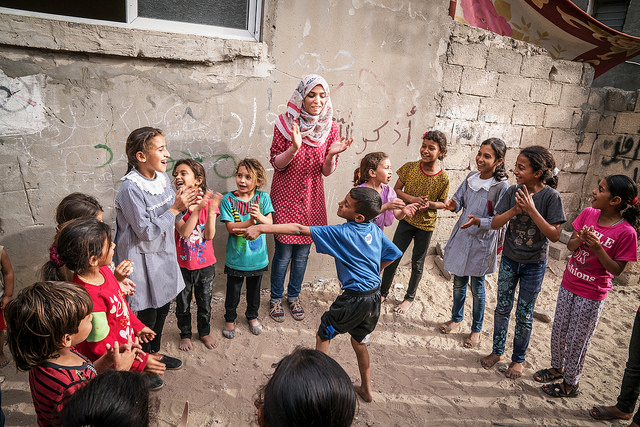 An increasing number of women in Gaza and West Bank are now the head of their households. Due to the restrictive Israeli occupation, some women lost their husbands to prison, while other men are struggling to find employment. As a result, many Palestinian women are taking it upon themselves to find formal or informal employment for stability.

Despite this reality, women’s empowerment in Gaza and West Bank is very limited. Due to discrimination in formal workforces and society’s assumption that women should not be responsible for household finances, the vast majority of women in Gaza and the West Bank are unemployed.

Of the women that are technically unemployed, almost all of them are working in some way. Most women are responsible for unpaid work within the home, and 85 percent of unpaid women in Gaza and West Bank work in agriculture. Therefore, while many women contribute to the economy through the agriculture value chain, they are still unpaid or underpaid for their work.

These are two of the ways that women in Gaza and West Bank band together, with the help of outside organizations, to generate fair incomes within the agriculture value chain.

Food Co-ops
What better way to generate income through cooking than through a food cooperative? Across Gaza and West Bank, women are coming together to run food cooperatives that sell a variety of goods from freshly made pastries to jams and pickled vegetables.

While most women cook the menu items, other women are responsible for marketing and communications, demonstrating that food co-ops create diverse opportunities for employment. Additionally, for the women who take pride in baking and selling traditional foods, food co-operatives are a celebration and preservation of Palestinian culture.

Successful food co-ops sell bulk and catering orders to schools and local businesses; however, the equipment needed to mass-produce certain foods is expensive and difficult to obtain. As a result, many female-run co-ops sacrifice quality and production potential to stay afloat. This is where organizations like American Near East Refugee Aid (ANERA), which hosts programs dedicated to women’s empowerment in Gaza and West Bank, are most useful.

ANERA’s agricultural program works with eight female food co-ops in Gaza by filling wish lists and providing them with expensive but essential equipment such as refrigerators and ovens. So far, women from co-ops assisted by ANERA noticed an increase in income from $57 to $72 per month and greater employment among local women.

Beekeeping and the Honey Value Chain
Due to the restrictive nature of Israeli occupation, there is an incredible demand for honey in the West Bank and Gaza. In the West Bank specifically, the amount of honey that is locally produced only covers 30 percent of the local demand for the product.

Honey production is a major source of income and women’s empowerment in Gaza and West Bank. Groups of women are working together to keep beehives on the outskirts of their villages. The women of one beekeeping business report $1500 in earnings per year through honey production. However, with assistance from organizations like the Food and Agriculture Organization (FAO) and local women’s associations, this number can be higher.

With assistance from local women’s associations, FAO trains female beekeepers in production and marketing strategies to increase profitability and promote the local sale of honey products in Gaza. Beekeepers are also taught to create processed honey products, therefore multiplying the number of products available for sale. After the product is created, FAO connects the women beekeepers to buyers in their local markets, allowing them to create new networking opportunities within their local villages.

Aside from honey being the most successful value chain in West Bank and Gaza, many women like beekeeping because it also serves as a hobby that gives them a mental break from their typical housework. Overall, female beekeepers trained by FAO’s program experienced an increase in product quality and sales, as well as network growth.

Women’s empowerment in Gaza and West Bank is being bolstered by the agriculture industry in a restricted and failing economy. Through proper funding and adequate training, these women can finally see a portion of the salary and benefits they have earned.