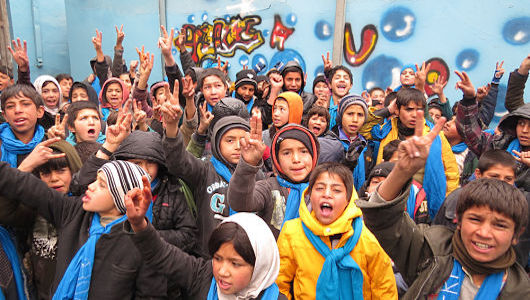 In war-stricken places, we often see a desensitization and even normalization of violence among the people, particularly in younger generations. The results of a survey conducted at Afghanistan’s Gawharshad Institute of Higher Education further supports this idea: the survey found that when confronted with violent actions or words, 58 percent of the targeted students would “take revenge.” With that said, 91 percent of students surveyed believed that their country will be peaceful in the future, a vision that could become more likely as the Gawharshad Institute rolls out a mandatory class encouraging peaceful resolutions.

The Gawharshad Institute, in response to the confirmation of this theory, has developed a curriculum to change this thought process and to encourage more positive, beneficial ways of coping. Students are now required to take a “Peace-Building and Conflict Resolution” class. Similar programs have been put into place in smaller elementary and high schools, but the Gawharshad Institute is the first to gain approval from the Ministry of Higher Education. The program focuses on major pathways for violence, such as land disputes. By catering the program specifically to the types of problems students currently see and will most likely see after graduation, students gain realistic and implementable tools that in the long run, and with more widespread popularity of the program, could help alleviate some of the problems the country faces with violence.

Of course, violence is generally both an outcome and a cause for developmental challenges, and so to completely lift the country out of the violent cycle it has been stuck in for decades, more systematic change is needed. However, education is one of the leading solutions for improving the conditions of developing countries. In the widespread chaos that followed the U.S. invasion of 2001, Afghanistan’s education system has faced complete turmoil as staff fled and few children attended school. Since then, education in Afghanistan has been one of the major standout points for the country. Attendance and acquisition rates are some of the highest in Afghanistan’s history. As students learn peaceful negotiation and de-escalation tactics and put these new skills to use in their future careers, Afghanistan will see a change in its general way of thinking in relation to violence. Though the high incidence of conflict is directly related to governmental problems, such as a lack of power and control, as these students graduate and develop their careers, some likely in government, the country as a whole will likely become less violent.

Though it may take a while for the results and implications of the program to become obvious, the course, if proven effective, may serve as a model for schools around the world. The idea of teaching real-life skills to prepare students to excel in the real world is the focus of such higher education institutions, so it would make sense that in places where violence is such a huge part of life, emphasis is put on keeping it abnormal and providing alternative tools for coping.