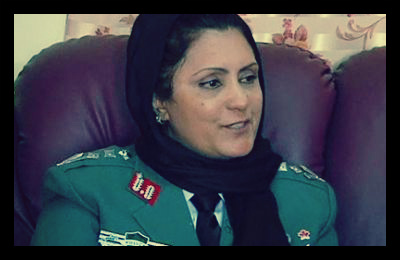 Afghanistan has appointed a new police chief, and her name is Jamila.

Colonel Jamila Bayaz, Afghanistan’s first female police chief, was appointed on January 14. She’ll head up the first District of Kabul, one of the most important parts of Afghanistan’s capital city.

“This is a chance not just for me, but for the women of Afghanistan,” the 50 year-old mother of five told NBC News.

The announcement is a triumph for the violence-torn country where most girls do not go to school for more than six years.

Based on recent gender equality rankings, statistics on maternal mortality rate and the high number of attacks on girls’ schools, Amnesty International has called Afghanistan one of the worst countries in which to be a woman.

Concerning female police officers, there are only between 1,500 and 2,000 total throughout the entire country- representing less than one percent of Afghanistan’s police force. Unsurprisingly, they serve mainly in gender and administrative units.

Bayaz is the first female officer to be promoted to such a senior rank, to which she has said “I will not waste it. I will prove I can handle this burden.”

Suggesting steadfast commitment to her newfound role, Bayaz has said she only took the job after being granted “full authority.”

“Before this post,” she said, “I was offered a similar one but I refused to accept it because I told them I would not accept a symbolic job.” Bayaz had previously worked in the investigative branch in the Kabul police headquarters.

Kabul’s provincial police chief, Major General Mohammad Zahir, applauded Bayaz’s appointment, calling it a “wise step” taken by the interior ministry. He added, during the small ceremony for the occasion held at her police station, that “women are capable of working like men.”

Sediq Sediqi, a spokesperson for the Interior Ministry, called Bayaz’s appointment a first step in promoting women within police ranks: “We will see a female provincial police chief in the near future,” he claimed.

Supporting such a notion is the announcement by the Interior Ministry that it planned to increase the number of female officers to 10,000 by the end of the year, with an intention to continue to promote more women up the ranks.

On her safety, Bayaz said “My children are worrying about me, but I am optimistic that I will stay safe.”

Her children’s concerns are not unfounded. In 2013 alone, amid rampant gender-based violence throughout the country, unknown attackers killed two senior female police officers in the southern province of Helmand.

Despite all the dangers and the long road ahead for women in Afghanistan, Bayaz’s tone was one of gratitude.

“I want to thank America and the international community for all of their help and support. I would not be here today if it weren’t for all their assistance,” she said.