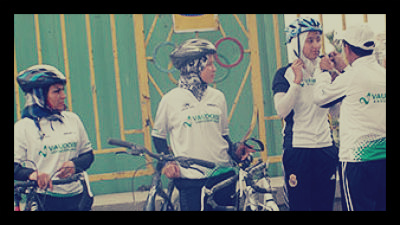 The Afghan women cycle for equality. Although women throughout Afghanistan are rarely permitted to even drive cars, a group of Afghan females has been changing minds by riding bikes. The Afghan National Cycling Team, led by 16-year-old Salma Kakar, hopes to be the face of a new phenomenon in the country – more women riding bikes, and possibly even representing their country in the Olympic games.

A nonprofit started by U.S. cyclist Shannon Galpin, called Mountain2Mountain, helped give the team their initial bikes and other gear to get them started. Galpin, no stranger to Afghanistan herself, was involved in volunteer work in the country and during her time there had a chance to cycle throughout Afghanistan’s mountain trails.

Despite aid from Galpin and support from team coach Abdul Seddiqi, the women still face immense hurdles. Afghan men still hold the belief that women do not have a place in society outside of the home, and for this reason, the riders are often heckled and have even received death threats. Although the women cover their heads, wear long pants and sleeves when they ride, Seddiqi usually has them train in secret to avoid any danger.

Salma maintains that despite what many Afghan men may think, a few have actually shown support and Salma is confident that their cycling team will be able to create lasting change, with cycling being just the beginning of the road to Afghan women achieving new freedoms.

Galpin hopes that not only will the bicycles be a vehicle for the women to get around, but also a “vehicle for social change.”