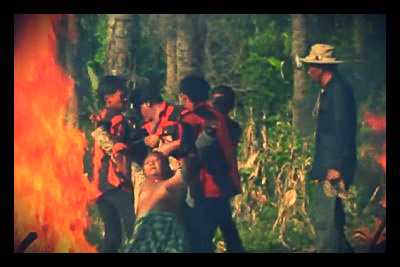 The Act of Killing, directed by Joshua Oppenheimer, is a documentary/investigative film on the 1965 genocide in Indonesia.  In 1965, the Indonesian government was overthrown in a military coup. Once the military government took over, the communist party of Indonesia was banned and anyone associated with communist activities was killed.  Eventually, the hunt for communists moved from the communist party to unions, intellectuals, farmers, ethnic Chinese and anyone in opposition to the new regime.

During this time, the United States and other western governments supported the communist hunt.  Headlines in the U.S. declared these killings a “victory over communism,” calling Indonesia “a gleam of light in Asia.” Within a few years over a million people were killed.

Oppenheimer traveled to Indonesia to speak to the victims of the communist hunt, but found that the people responsible for these killings were free, in positions of power, and happy to talk about their involvement in the killings.

He asked one of the killers, Anwar Congo, and his fellow gangsters to recreate their killings for his cameras.  The men were under the impression this would turn into a Hollywood-style movie that Americans would celebrate as they had celebrated their actions some fifty years ago. Anwar’s reenactments provide insight into the heroic characters these men believed they were, as well as the nightmarish consequences of living with the memories of killings.

The film follows Anwar and his friends around the city while they go about business as usual.  Anwar and his friends are wealthy by Indonesian standards, but live quite normal lives.  Moments of silly bantering, reminiscent exchanges and monotonous tasks make up about half of the movie.  These moments make viewers want to laugh at them, and worse, like them. There are several moments where one quickly forgets each of these men are responsible for the brutal murders of a thousand or more people.

In other scenes, viewers feel sorry for them as they recount nightmares and what could possibly be the onset of PTSD.  However, they never say they feel remorse.  All three stand by what they did—but they also all recognize that what they did was wrong.  As one of the killers puts it, “war crimes are defined by the winners.  I am a winner, so I define what is a war crime.”  They repeatedly say they would do it all over again if the communists tried an uprising.

The movie ends with Anwar playing a victim while his friend plays the torturer.  Anwar tries the scene three times, but each take he breaks down.  In tears he says, “Is this what my victims felt? I did this to so many people.”  The director reminds him that his victims must have felt worse, because Anwar knew it was only a movie while his victims knew they were going to die.  Anwar returns to his old “office” where he slaughtered people and begins to vomit.

In the end the viewers are left wanting these men tried by an international court for their crimes, but feeling like these men may already be suffering the consequences of their actions in 1965.