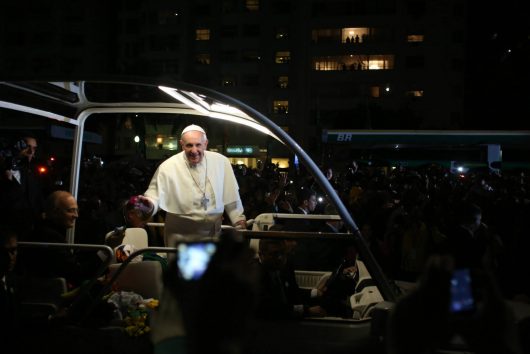 Slavery persists in the modern age all over the world, in fact, many first world countries fall victim to human trafficking, yet these instances are rarely publicized.  Human trafficking in Europe is both under-reported and under prosecuted. In 2010, at least 2,400 victims in Italy were identified but only 14 perpetrators were convicted. Pope Francis is helping to open the discussion of human trafficking and making headlines with his visit to 20 women forced into prostitution. In addition to providing valuable support to the women, he is helping to garner international attention and support to this important issue.

On August 12, Pope Francis made a surprise visit to 20 women in a Church-sponsored apartment in Rome. Most of the women are about 30 years old from Nigeria, Romania and Albania. They were lured in with jobs but seriously abused and forced into prostitution. He spent over an hour listening and supporting these women. This visit was part of the Pope’s Fridays of Mercy, where he visits a suffering community.

While human trafficking is rarely discussed, the fact of the matter is, everyday people are coerced into hard labor or sex. Both individuals and organized crime groups can be the perpetrators. Gabriela Chiroiu, head of an anti-trafficking program, says that traffickers in Romania “operate as cells,” which make it difficult to find all the disconnected groups. Italy’s expansive coast makes it particularly attractive for smugglers. These are only two countries heavily affected by human trafficking. There are an estimated 15,846 victims of human trafficking in Europe.

Pope Francis’ visit was not the first time he called attention to this grievous breach of human rights. Last year, he congratulated the Catholic Santa Marta Group for their work to end slavery. Earlier this summer, he emphasized at the Judge’s Summit that it was everyone’s responsibility to end modern slavery.

Fortunately, Pope Francis is not the only one fighting this important issue. Reaching Out Romania has helped 470 victims all over Europe. Not for Sale, an international organization, provides internships and job training for victims in the Netherlands and legal assistance for victims in Romania.

The fight against human trafficking in Europe and the rest of the world is quiet but alive and ongoing. Pope Francis’s visit and remarks have brought this injustice to the public eye again. The 15,846 European victims need support and assistance that can only come once human trafficking is widely recognized as a problem.