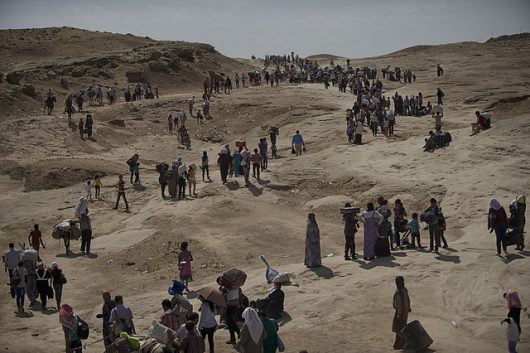 Six years of civil war has resulted in more than five million displaced Syrian refugees, who are now distributed among neighboring countries. Aid agencies continue to urge the global community to provide further assistance as the humanitarian crisis escalates.

Syrian civil unrest emerged in March of 2011 in the city of Deraa, after a group of teenagers “who painted revolutionary slogans on a school wall” (BBC) were arrested and tortured. Pro-democracy protesters marched in the streets and were subject to open gunfire from security forces. Several people were killed, which only fueled the fight against government oppression.

Thousands of protesters were demanding President Bashar al-Assad’s resignation and marching in the streets throughout Syria. Eventually, opposition supporters began to arm themselves. Initially, those in opposition of the government carried weapons in self-defense. As the struggle wore on, rebels began to rid security forces and fight for control of major cities, towns, and rural areas. The country descended into a civil war.

The U.N.-Arab League Envoy for Syria estimates that 400,000 people have died in the Syrian conflict, which has lasted longer than World War II.

The sharing portal reports Turkey as the top host country, providing aid and refuge for 2.9 million displaced individuals. Turkey, which shares a border with both Iraq and Syria, registered nearly half of the five million Syrian refugees. Additional host countries include Lebanon, Jordan, Germany and Saudi Arabia.

Due to IS terrorist attacks, refugees resettled in Europe face growing scrutiny. This prompted the UNHCR to strongly urge Europeans in France and Germany not to “put humanity on a ballot” during this year’s political election. Far-right candidates oppose the influx of refugees seeking asylum in their countries and have vocally objected to being a host country.

Since 2011, Turkey has spent approximately $8.7 billion on providing for the increasing refugee population, which includes education costs. Presently, the top host country has integrated 300,000 Syrian refugees into the education system. “They are our guests,” Turkish deputy education secretary Yusuf Buyuk states, “They have rights to education under both nations and international law.”

The UNHCR urges the international community to provide financial aid, safe asylum and medical assistance for the millions of displaced individuals who have endured six years of persecution and violence.