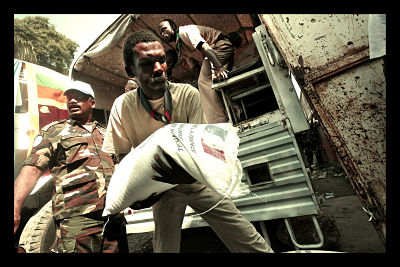 Global poverty comes in an abundance of shapes and sizes. To effectively combat global poverty, focusing on key areas such as investing in open political and economic systems, promoting education, and improving health systems would be a great start. By improving these key factors in impoverished areas, the quality of life could be improved for a number of people.

1) Open political and economic systems allow for greater freedom, less violent outbreaks, and are known to consistently reduce poverty. Creating stability in markets is an important step to increasing the local food shortage. With an increase of economic market security a country can stand on its own and provide for itself, therefore negating the need for outside aid. Combining a stable economic system with a proven democratic political government can also benefit an impoverished area. The democratic government is not a perfect one, but onlookers cannot dispel its success. The results do take time, however. Installing the government is the first step and keeping the correct people in office is crucial to the development of a country laden with poverty.

2) Many poverty stricken areas suffer from low literacy rates, and this greatly aids the setbacks poverty causes. Without proper education, a country cannot be relied upon to improve their situation. A country without learning enabled people curtails itself, because it cannot make the improvements needed on its own to advance. The lack of education means the people of the impoverished nation must rely on nations that do incorporate proper schooling; without the knowledge being taught to them in stable learning areas the country cannot provide its own improvements.
Programs such as UNICF have made great contributions to this cause, and in time, the work put in will be visible to all.

3) Improving the health systems in poverty stricken nations is one of the hardest goals to achieve. The health and disease conditions are plentiful, ranging from city cleanliness to malaria outbreaks. By containing even the smallest of these problems (city cleanliness), progress would be visible. Outside markets selling grocery that require refrigeration suffer in the elements daily, causing the food to lose nutritional value. A true grocery store equipped with refrigeration keeps food fresh, allowing the nutritional value to carry over for longer periods of time. Healthy food is a corner stone to a healthy society.

Health and disease conditions could use improvement worldwide, but no area more so than impoverished areas. Without a proper healthcare system, many victims of illness are forced to face their ailments with little to no medical treatment. Deadly viruses such as HIV and AIDS have rocked the world, and treatment for these diseases has been difficult to come by. However, established nations have developed means of treating HIV and AIDS to a certain degree.

While a cure has not been discovered, these containment methods are not available in poor countries. The diseases have ravaged poverty stricken areas, but United States programs have attempted to incorporate aid for those suffering. Programs like PEPFAR have assisted countless victims through their outreach methods.

Global poverty has many drawbacks and problems. However, these problems do not have to be permanent. With the correct systems in place in areas of politics, economic stability, education, and health poverty can be effectively combated.