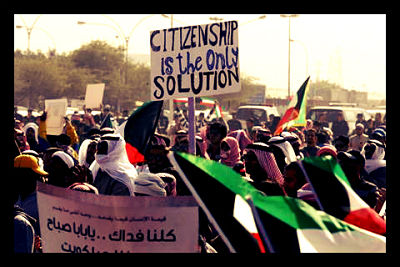 What do you do when no nation recognizes you as a citizen? For 12 million people around the world, statelessness is a daily reality. Born without citizenship, they are often doomed to a lifetime of joblessness and homelessness,with deportation a constant threat.

Without official papers verifying citizenship, the stateless cannot be hired by any employer. They also cannot qualify to rent or own a house or other property. Forget opening a bank account, renting a car, getting a drivers license, traveling long distance via airplane, or getting married. Public services that most people would consider to be basic human rights–such as education and healthcare–are not permitted for non-citizens.

As undocumented people, they live in legal limbo and are subject to harassment by the police for being “illegal immigrants.” Yet deportation is not possible, since they have no country to claim them. They “often end up in detention, in destitution or being bounced around like a ping pong ball from one country to another,” says Mark Manly, head of the UN Refugee Agency (UNHCR).

Similar to undocumented immigrants, stateless people  suffer persecution and isolation, which often leads to “depression with strong feelings of helplessness, frustration and exclusion,” according to Manly.Without any avenues to citizenship and no country to return to, stateless people are unable to advocate for themselves or to improve their existence.

“If we don’t have common, minimum rules there will always be people falling through the cracks. So while the work on accessions and reform of nationality laws is not very glamorous, it is very important,” Manly said.

Without consistent citizenship laws across all countries, people can become stateless in a variety of ways. Children born in one country to parents who are citizens of another country sometimes go unclaimed by either nation. Countries also make it national policy to deny certain ethnic groups citizenship, like the 93,000 Bedouins of Kuwait or 800,000 Rohingya Muslims in Myanmar.

The UNHCR has recently increased its efforts to spread awareness about statelessness, and a number of countries have amended laws that once left people  without citizenship. UNHCR’s campaign has also prompted several countries to sign the UN Conventions on Statelessness. Other nations have also improved their handling of stateless people, recognizing their unique situation, and providing them with basic human rights and legal protection.

Ward Family Foundation Mixes Business and Charity Is it High Time we Stop the Pity for Africa?
Scroll to top