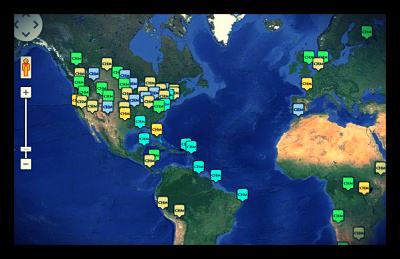 Poverty’s effects on world economics, world peace and global standards of living have been well-documented. But, there is another area where poverty has had negative consequences: the environment. Below are 12 of the many ecological effect global poverty has on the world’s environment:

1.      Global warming: The Earth’s temperature has increased the global temperature increased about four degree Fahrenheit in the pre-industrial revolution. The reason for this increase is the use of traditional natural energy such as coal, oil, and natural gas. Global poverty keeps these countries from making the changes in the energy system. Around two billion people in these countries still rely on biomass fuel- fuel wood, charcoal, and animal dung. The biomass fuels contain high level of CO2, the main cause of global warming.

2.      Air Pollution: In addition to biomass fuel, people in developing countries use solid fuel (oil and natural gas) for their daily activities. At the same time, people in poverty do not enough resources to purchase appropriate transportation. Many people still use old vehicles from post-WW2, and these vehicles do not have the capability of screening out toxic gas. Combination of the reasons above result in the air pollution.

3.      Land pollution: Poverty comes with poor agriculture. In third world countries, farmers do not have access to advanced farming methods. They use toxic chemical in farming, and these chemicals leak into the earth and poison the land. Poisoned land is going to be unavailable for agriculture. Besides, it will take a considerable amount of time, money and effort return the land to its original state.

4.      Water pollution: With the lack of clean source of water, people in third world countries use rivers, lakes and the sea for recreational method. Bio waste can be absorbed natural through time. However, in the big city’s slums, the amount of waste is substantial to be absorbed, and leads to pollution in the area with water supply.

5.      Desertification: As mentioned above, people in poverty use wood as a source of heating. Many forests are chopped down but no plan has been put in action to replace them. Therefore, the land will become more and more deserted and speed up the desertification process.

8.      Animal Conservation: With the air pollution, the land pollution, and the water pollution, animals cannot adapt to these rapid change in the environment. Many species have been extinct.

9.      Coral Reef: Toxic and waste from rivers and lakes eventually make their way into the sea. The coral reef is dying out due to the pollution. Coral reefs are the food sources and home for many sea creatures. Without coral reef, the big change in the sea has been experienced.

10.  Climate Balance: All the challenges above have increased the pressure on the balance of our climate. The climate is not equipped to handle big change in all directions. Eventually, the climate is beginning to shape unfavorably to humanity.

11.  Natural Disaster: With unbalance climate system, the Earth tries to balance itself with rapid change on the Earth surface. The number and seriousness of natural disasters are increasing. For example: hurricane Katrina, earthquake in Japan, and recently huge hurricane in the Philippines.

12.  Overall Ecological System: With many threats and changes in every corners of the Earth. The Ecological System has been affected tremendously in negative manner. Natural disaster becomes more and more frequent. This phenomenon will further push global poverty deeper in many nations.