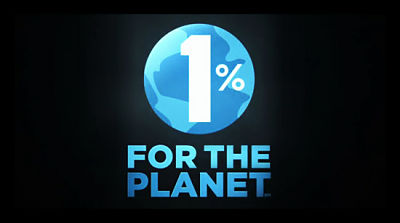 “The economy is a wholly-owned subsidiary of the environment, not the other way around.” –Senator Gaylord Nelson

In addition to getting companies to commit to giving back, 1% for the Planet has also organized the music outreach program. Musicians such as Jack Johnson, G. Love, Submarines, Kaiser Cartel, Josh Ritter and many others contribute to the project. The collaboration of 1% for the Planet and the musicians led to an album featuring many exclusive or rare versions of songs. Sales of the album support NGOs work on environmental issues. Jack Johnson was the first huge hit for 1% for the Planet, which fueled the explosion of the 1% network.

The 1% for the Planet network is 1,400 businesses in 38 countries giving $15 million annually to 2,000 global environmental groups. Companies join to gain the network, recognition and morality of the group. Once the business signs the licensing agreement and membership dues are paid, they are free to use the 1% logo. The logo is similar to the certification of environmentally sustainable business practices. However, the 1% group does not look into the practices of the business.

1% does not collect money, other than the membership dues, from the companies. The member companies donate directly to the environmental group of their choice. Recipients are chosen from the list of approved 501(c)(3) organizations (or internationally equivalent) with a high degree of successful projects. The preservation of the Madison River in Montana. 1% of donations prevented the famous angler river from being developed by real-estate. This project was initiated by the first two members of the 1% business network: Yvon Chouinard owner of Patagonia Inc and Craig Matthews owner of Blue Ribbon Flies. Other businesses that are members include Cliff Bars, Sweat Pea Bicycles, New Belgium Brewing Co. Chickamaw Organic Farm Ranch and Wildlife, 3 Forks Insurance, 5 AM (Japan), 7zerolab (The Netherlands), 8Bottles and many, many more.

Photo: 1% for the Planet

Early Warning Systems are Not Just for EarthquakesMama Hope: Mamas without Borders
Scroll to top